Here’s my (belated) download of the Kona race. I went 9:43 this year vs 9:40 last year. I swam faster, biked a bit slower and ran exactly the same.

I was pretty happy with my race. Even though I only got 48th in my AG I feel it was the best I could have executed (except I would have liked to run a 3:15 instead of a 3:30, but that will take a more focused and specific run block to get right next time). Overall I feel like I can still make some big gains on the run, which I’m looking forward to doing! Oh, and I beat Apollo Ohno 😉

Here is my report.

There is a short summary to start, with a more detailed account further down, and then a comparison of 2013 and 2014 at the bottom (edit: formatting went crazy so I copied the data into a linked google doc). I thought that would be interesting because there was only 2 minutes difference year on year. I biked a lot easier and was not much slower. Most of the reason for that I believe to be aero gains from new bike and position.
Summary: 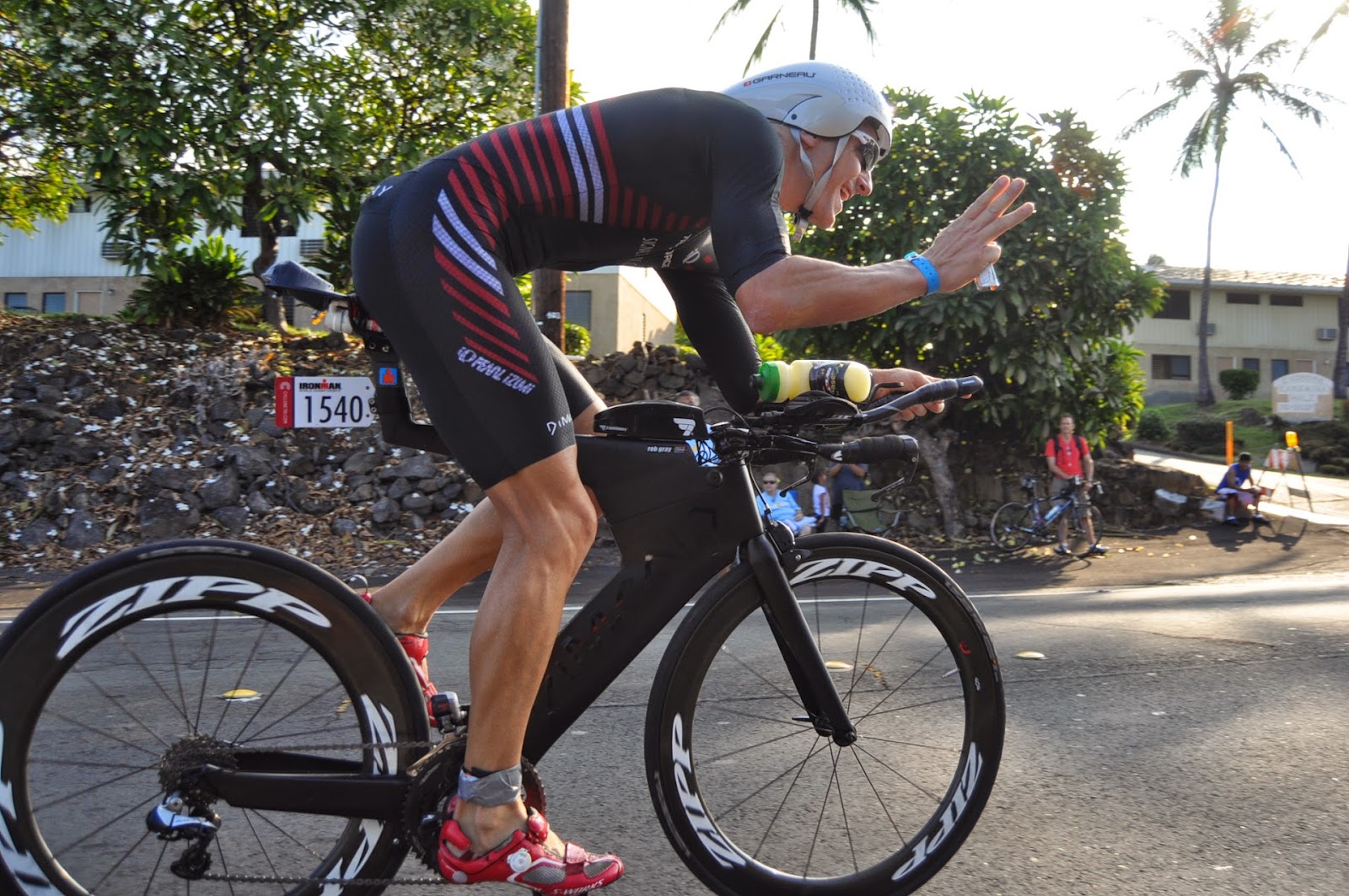 Swim: 1:03
Very happy with the swim, the hours of training have paid off. Even though I was hoping for sub 60 min, going 63 min on a slower year was a result I was happy with, and set me up for a much easier bike ride. Total distance on my garmin was 2.7 miles, pace 1:28 / 100m
Bike: 5 hours flat.
IF 0.69, NP 226W, AP 205W, VI 1.10
The funny thing I was only 5 mins slower than 2013, on 10 watts lower NP, in tougher conditions. I attribute most of that to the new bike with a cleaner setup, more aero and most importantly enables a much more aero position. You can see in the pics below I’ve got a nice flat back (I was coasting down Kuakini here, I’m a little more upright when pedaling normally). I stayed in aero pretty much the whole way, except a few times I sat up on Hawi climb, and sometimes when being passed I had to sit up in order to fall back to legal distance. I’ve drawn up a comparison table of 2013 vs 2014 at the bottom which is some pretty interesting data. The Dimond was super stable in these conditions. Everyone will tell you how windy it was, this bike was rock solid.
Run: 3:30
Ran very conservatively up till the energy lab, with the goal of laying down the pace back on the Queen K. It went mostly to plan, except the last part. I just couldn’t pick it up in the last 10K (in fact I slowed). But overall I feel like I executed most of the race well.
Bike setup:
Dimond Superbike with di2, power2max PM, rotor 165mm cranks, zipp vuka stealth bars + bta mount, tririg omega brakes, zipp 808 rear, zipp 404 front. Torhans Aerobento with a hole cut in it for the di2 junction box. Dash TT9 saddle with Caffelatex mounted between the rails. Spare tube + co2 velcro’d onto the saddle and wrapped in 3M electrical tape. I really like my setup it’s nice and clean. The bike as you see it here is exactly how I raced it 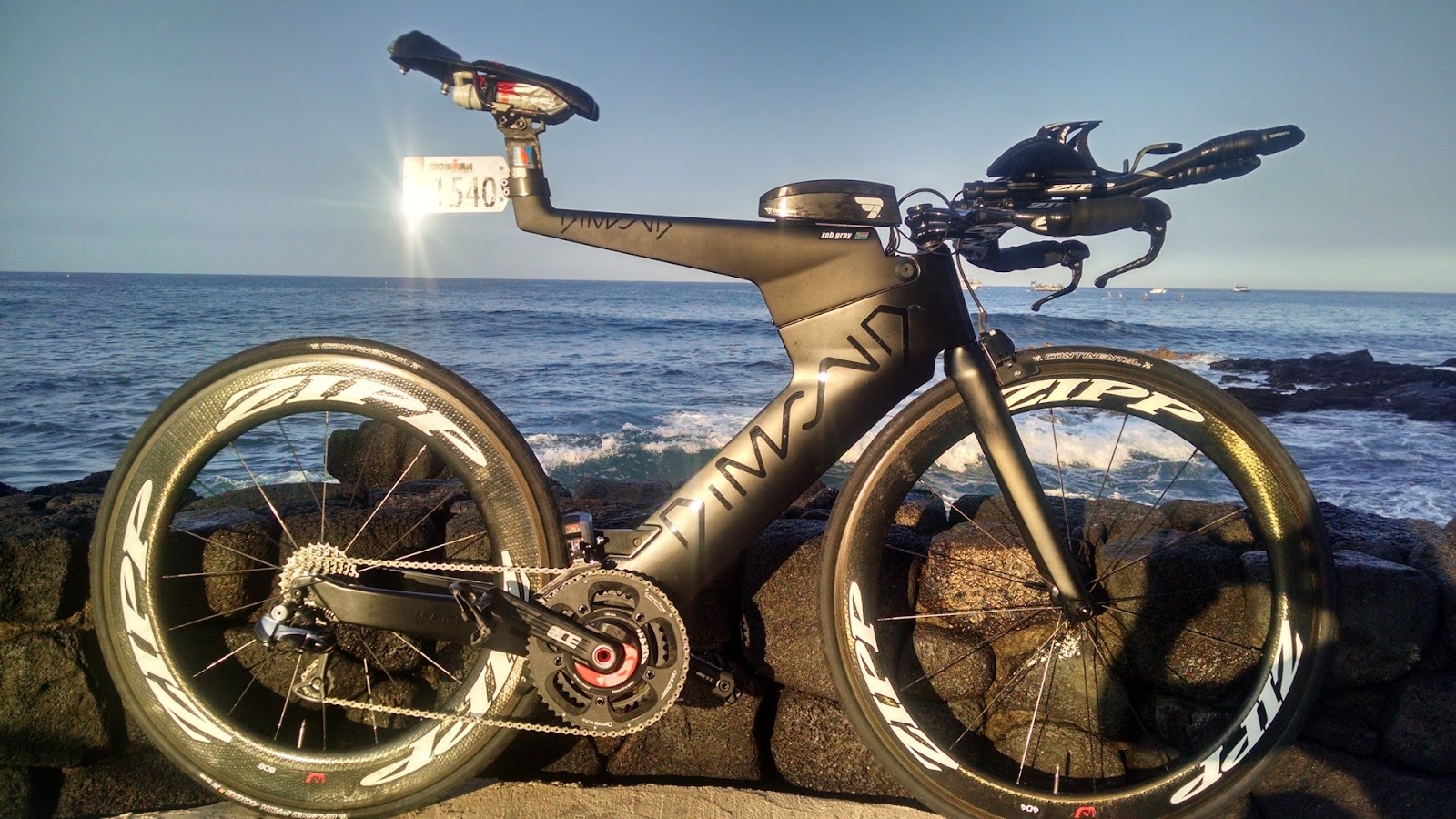 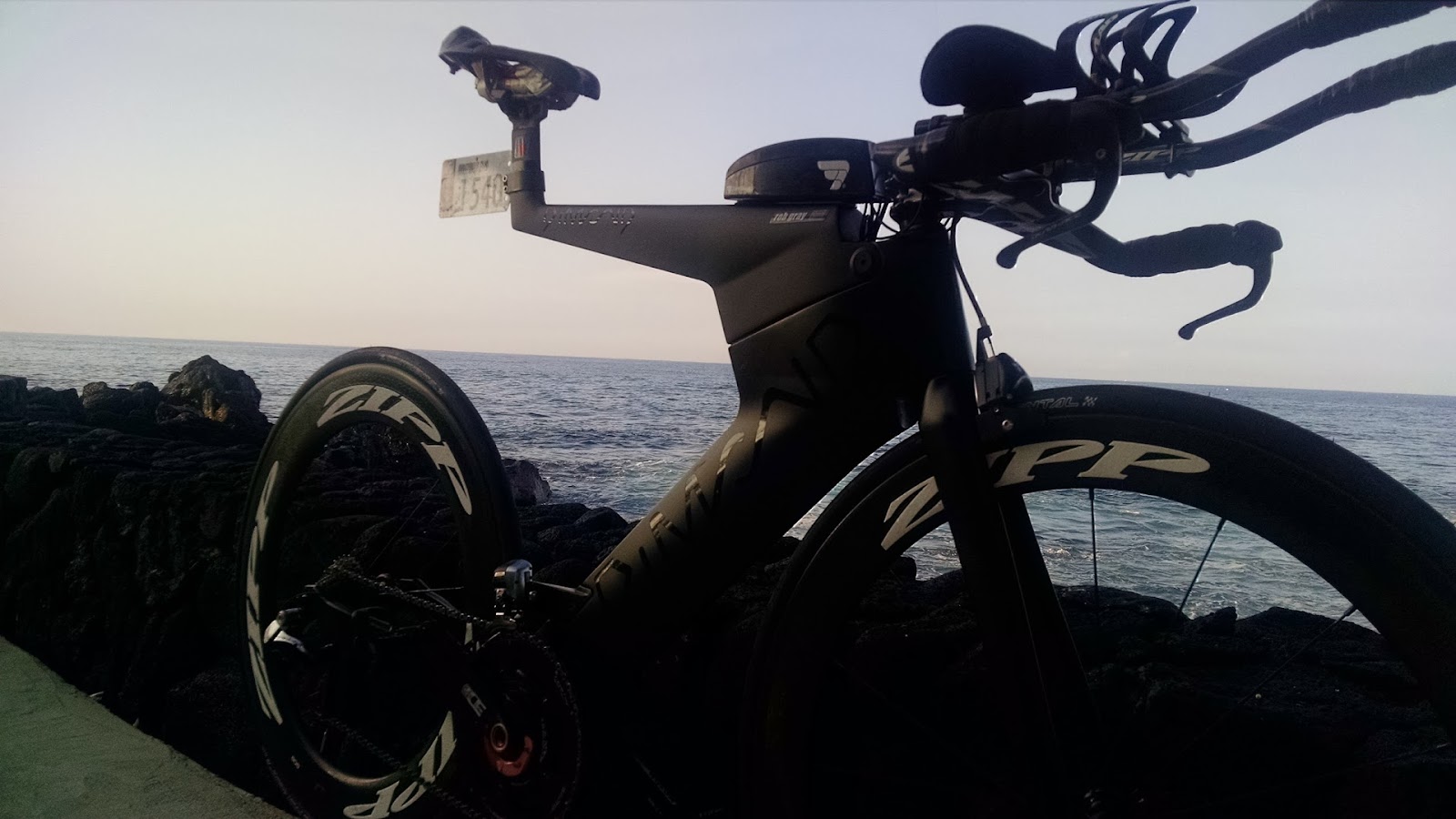 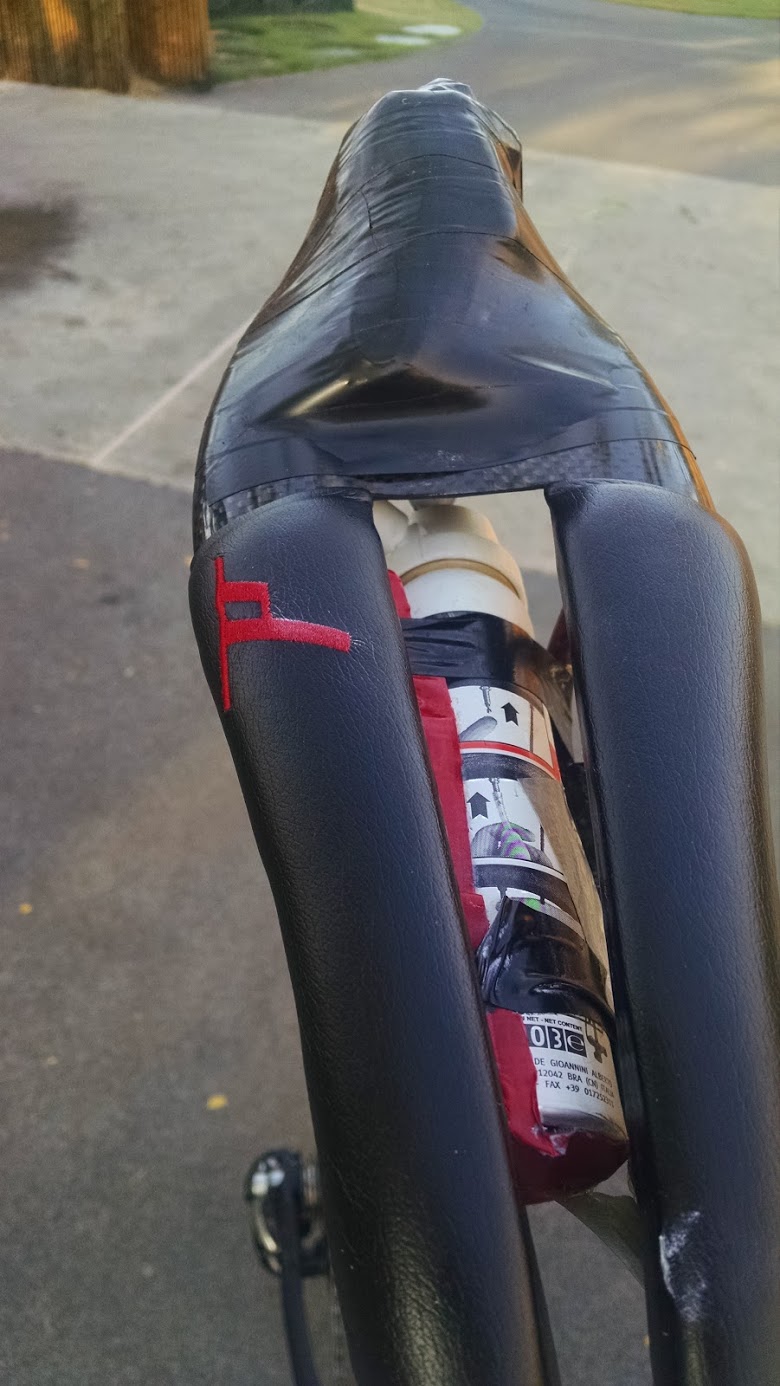 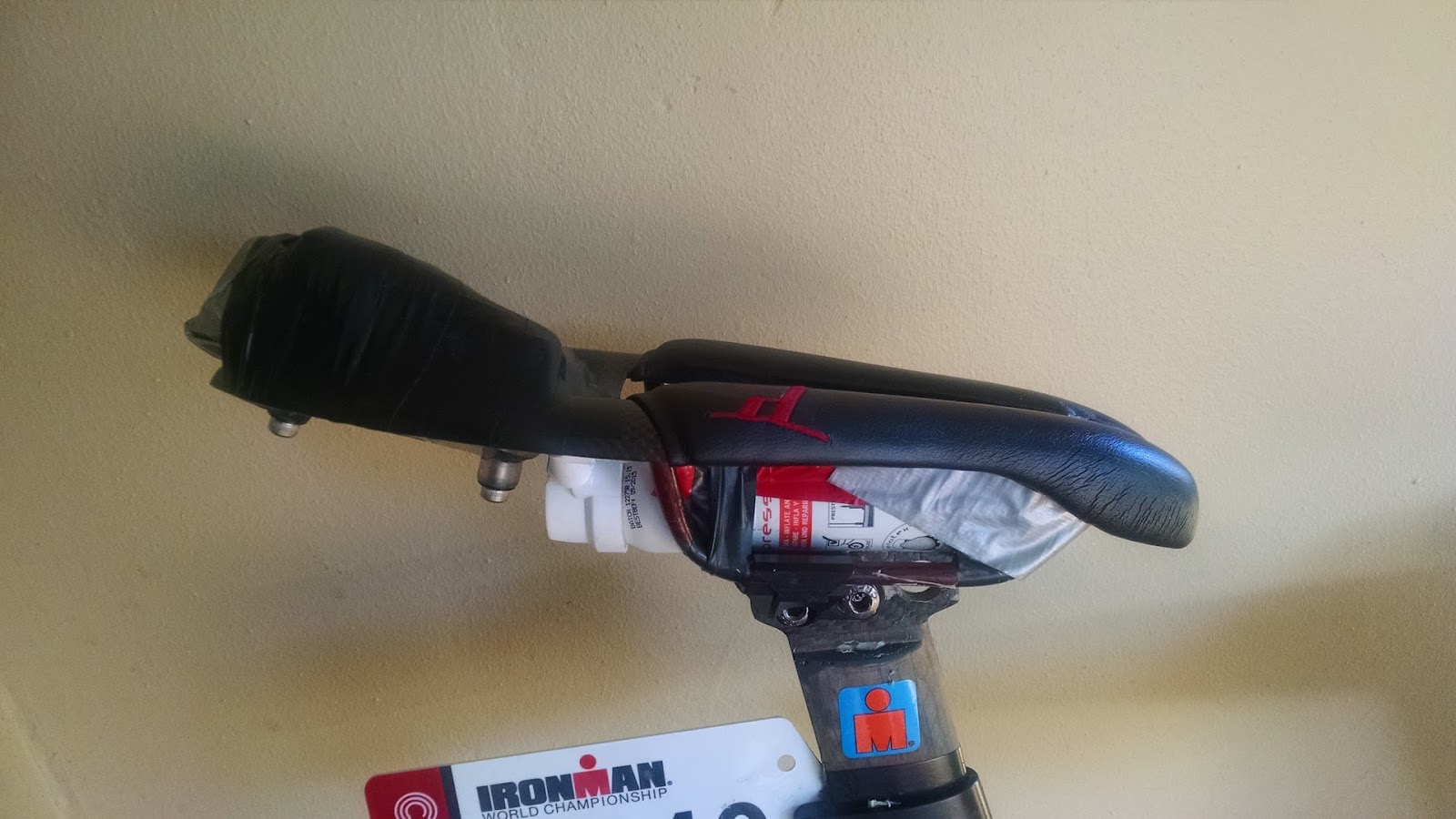 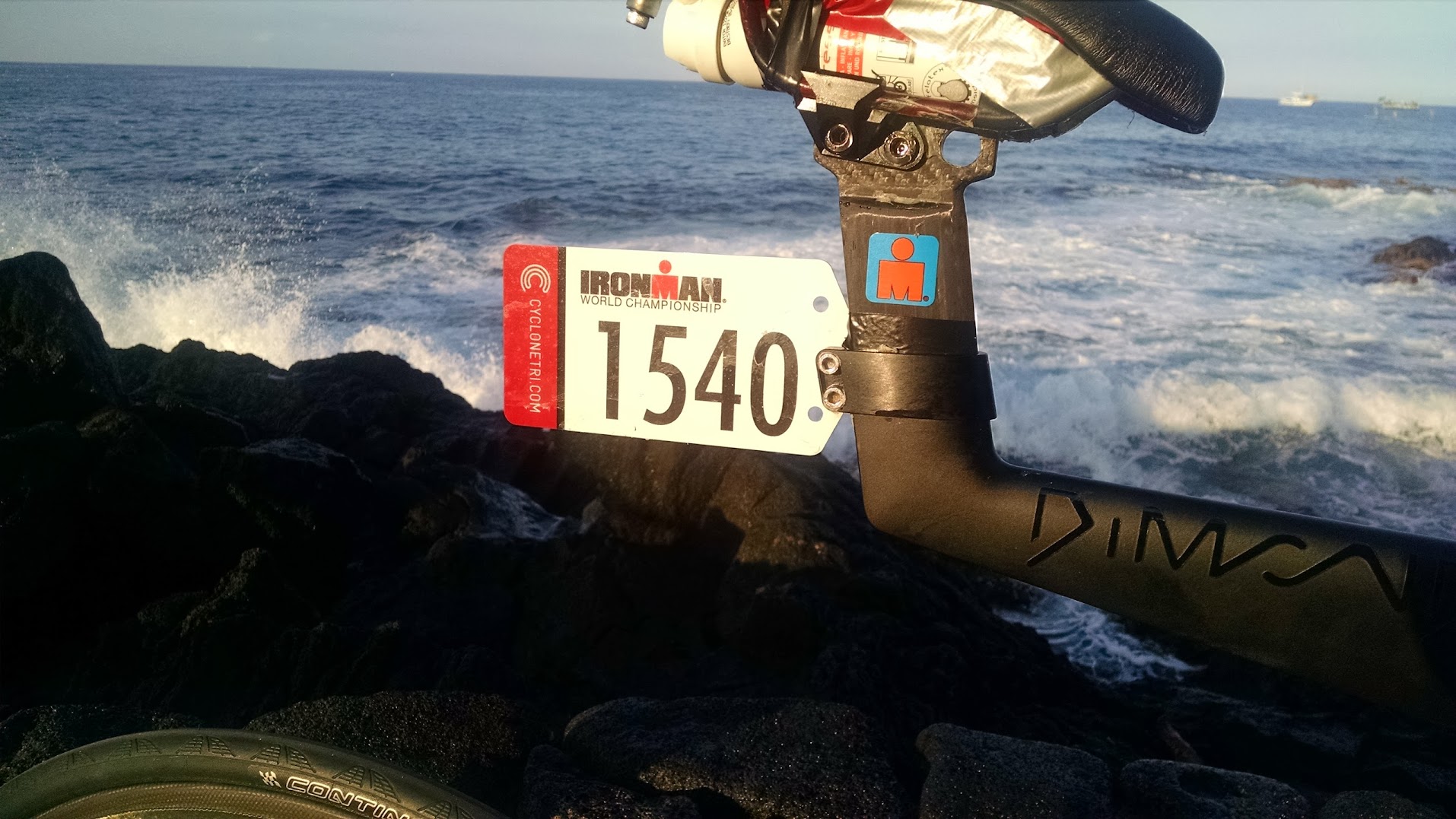 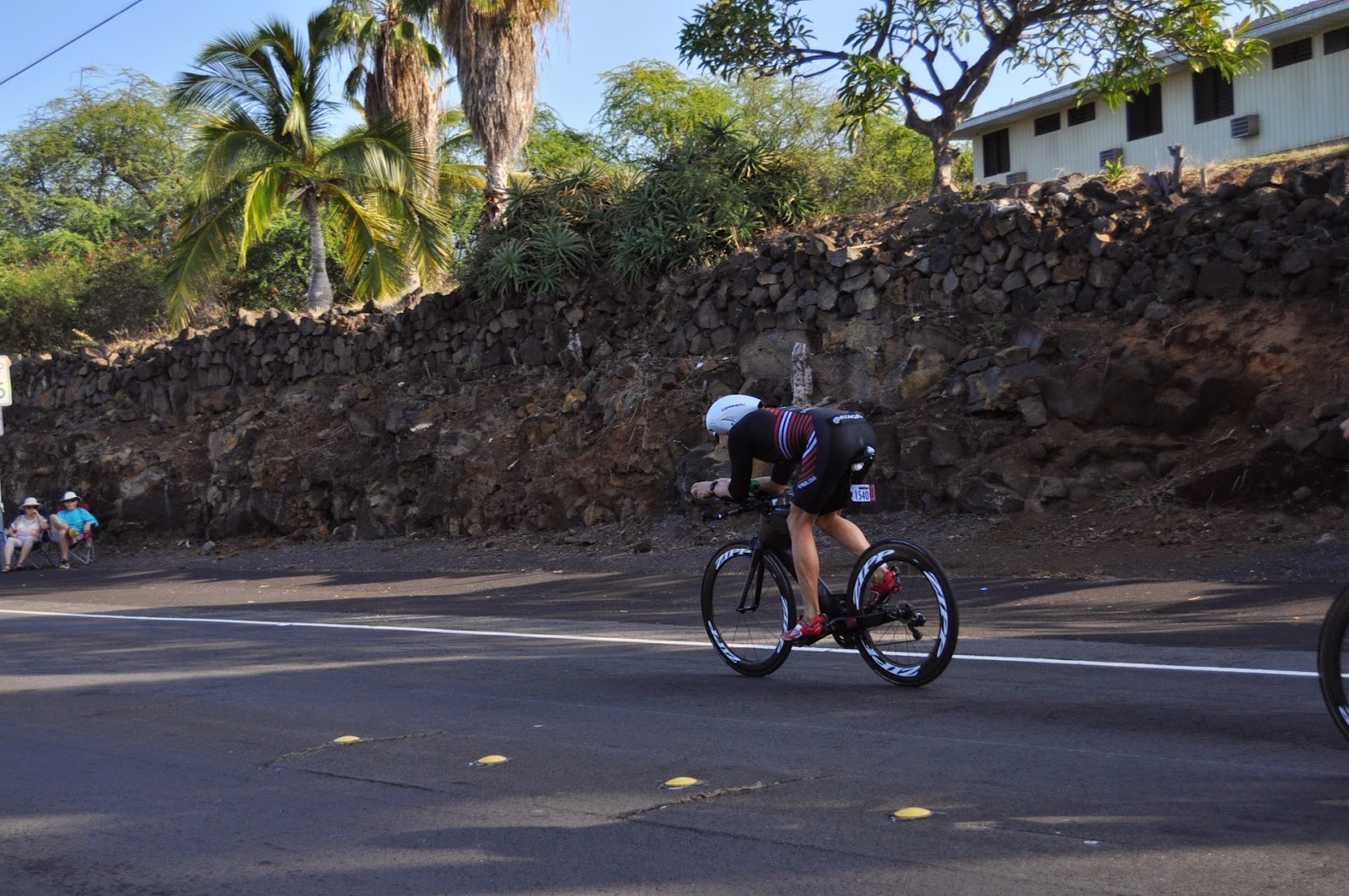 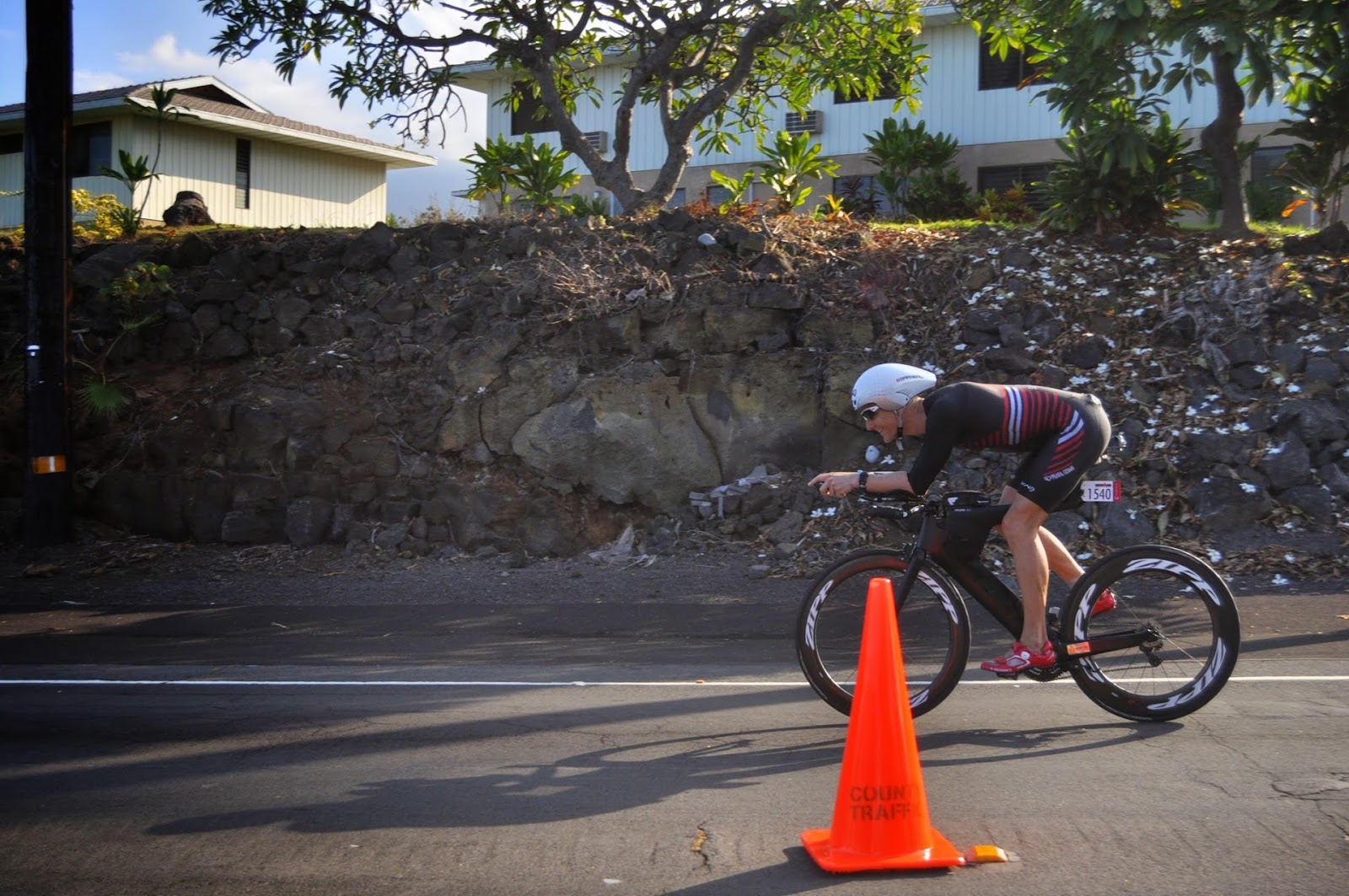 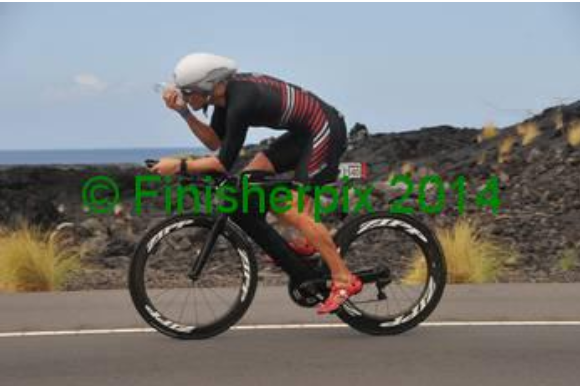 [my setup enables me to stay pretty aero even while drinking]

Long version
Swim
Started just right of the large TYR pontoon. Had clear water for about 5 mins, until everyone merged, then it was pretty much white water until the turn. I swam wide and stayed left, then if any congestion happened I could just stay left and avoid it. The extra swim form paid off because everyone around me was a decent swimmer, meaning I had great feet to follow most of the time. With a slightly long course and my wide turns I swam 2.7 miles in 1:03 which I was happy with (1:28 / 100m avg pace) http://tpks.ws/kOUf
The way out was quite a bit faster than the way back (1:22 /100m out, 1:34/100m back)
T1
Up the stairs, took swim skin top off, hit the showers. I should have rinsed my eyes out – they were burning with salt for a good part of the ride. You then grab your bike bag and run to the change tent. I had a bottle of ensure in the bag, which I managed to easily chug by the time I hit the change tent. The volunteer helped me pull the top of my octane on – so that was pretty quick. However I ran out to my bike with my cap and goggles still on, so I ran back quickly to hand them to the volunteer. Grabbed the bike and off I went.
Bike
Coming out the water 4 mins faster than 2013 made a huge difference, because I started riding with a higher % of racers, instead of trying to catch them from behind. I kept it super easy for the first 30km. A few guys blasted past me on Kuakini but I just let them go. As for the others, there were some huge packs up until mile 20/30. These were really unavoidable due to so many athletes being out at the same time. I think the officials did a great job of enforcing the drafting rules, by letting everyone get sorted out for the first bit, then clamping down hard once everyone was out on the queen k. I was pretty lucky in that I was stronger than most riders in the packs, meaning I could just lay down constant power, and slingshot wheel to wheel for a long way while still being legal and not burning any matches (I was still riding well within myself, about 235 watts vs the 255 that I thought I would be riding at this part of the day). Most riders were doing their best to stay legal, but I saw some blatant wheel sucking too. I was happy to see a full penalty tent All the way to Waikaloa felt like a nice easy warmup – just past the resorts we were hit by a strong headwind and I managed to get clear of the packs pretty easily. 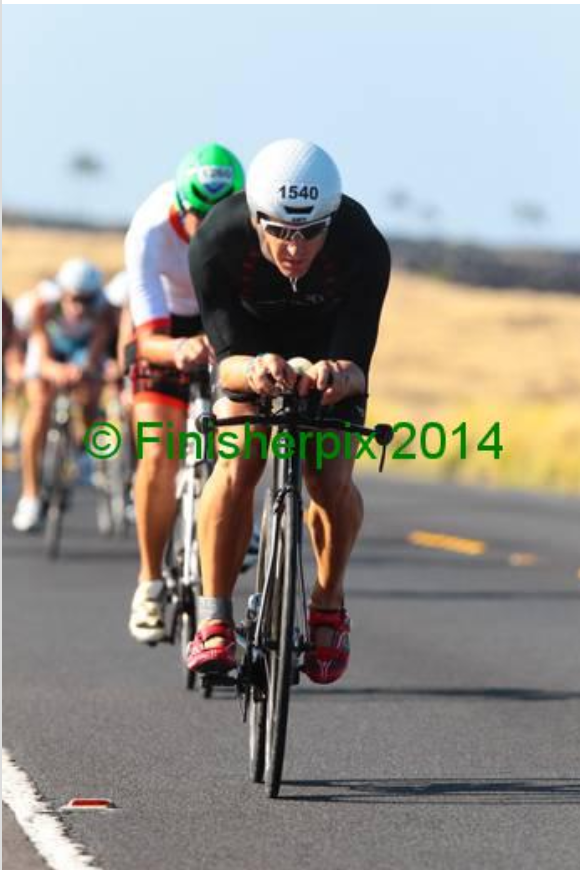 The cross winds were also pretty crazy – at one point I got blown all the way over to the left hand side of the road. There were still a few good riders out there so I had company most of the way up to the start of the Hawi climb.
As we started climbing up Hawi, the head/cross winds were pretty incredible. Even though we were climbing (relatively slowly), it was difficult to let go of the bars at all without losing control. At that point I was getting pretty worried about the descent, since we’d be hit by the same winds, but at 40mph+ downhill!
The Hawi turnaround came pretty quickly, and yet again the penalty tent was overflowing. This was the last time I saw any big packs – there will still a lot of riders out there but it was now very easy to stay legal. The Hawi descent was a lot easier than I was expecting. I coasted for most of it. My new Dimond bike was incredibly stable in the crosswinds, I didn’t have a single sketchy moment and it gave me a huge amount of confidence on these exposed windy sections.
A few guys blasted past me on the Kawaihae climb, but since I was already doing 300 watts I let them go!
Back the on Queen K, and it was into another headwind for a bit, before going through the most fun part of the day. Leading up to Waikaloa, a tailwind hit us and just pushed us along like crazy. I was doing 44 mph without even pedaling! At that point I was 3:45 into the ride, and a quick mental calculation had me thinking that a 4:3X would be on the card if this wind kept up. Unfortunately, 4 mins later we were hit by a headwind that slammed us right back to 18 mph, then 12 mph… ok, so back to a 5 hour estimate!
Guys were now dropping like flies – clearly the conditions had taken their toll! I kept it pretty even, just burning the occasional match to jump gaps. I kept on taking in water at the aid stations (one bottle at the beginning of the station, one at the end, drinking ¾ and dumping the rest on my back).
I was still feeling great at the 100 mile marker – which was surprising since I’m usually very ready to be done by 90 miles. The remainder was pretty comfy and I was now passing a lot of people. I rolled into T2 feeling nice and fresh – the litmus test being when you hand off your bike and try to run – in 2013 I was super wobbly and in 2014 I felt fresh and ready to run.
In T2 I changed out of the Octane and into a speedo + run singlet (great cooling!). I do lose quite a bit of time doing that so one day, if I’m in contention for a podium etc. I’ll probably just run in the Octane.
Run
I started the run feeling strong. My goal was to run 7:30/mile, which felt painfully slow for the first mile. I held the 7:30 for most of it, but them some weird quantum physics took place around 0.8 miles and I went through mile 1 in 6:59. I managed to hold around 7:30 pace for most of Alii drive, up until Palani hill where I walked. Back up on the Queen K I was still feeling strong, but running within my comfort zone like Kevin had told me to. I kept it comfortable all the way into the energy lab, and then stopped at special needs to pick up another bottle (next time I won’t do that). I walked again at various points up the energy lab hill then prepared to unleash the pace back on the Queen K. However, the unleashing wouldn’t come! As hard as I tried to push, there was no answer… my perceived effort was rocketing up and my pace was dropping. I calculated that I just needed to stick to 8:00/mile to beat my 9:40 from 2013, which I managed until mile 23 but then I did 3 x consecutive 9 min miles which put that plan to bed. I put in a 7:03 for mile 26 which made for a nice strong finish, but it wasn’t enough to sneak under my 2013 time. Still, on a tougher day, I was very happy with a time only 3 minutes slower.
Overall, I thought I executed the race really well. I still need to figure out the final part of the run, but I think with another couple of Konas I’ll be able to nail that too.
Next stop, Arizona! That’s going to be a super competitive race in M35-39, and I’ll actually be super lucky to KQ there. So my primary goal is to get a fast time (I’ve never raced a fast Ironman course, so looking forward to seeing what’s possible!)