IMAZ was my 2nd race of the 2015 season. Kona was my first race, and I feel IMAZ was a much better day for me, probably because it was cold, and not hot at all. With the exception of the swim I feel that my result reflects my current form (which is ok, not great). I ended up with 9:19 and 2nd in M35-39. I had a terrible swim (I swam faster in Kona this year with no wetsuit, rough conditions and a longer course!). I need to figure that out, I should have been 5-6 minutes faster. I’m a bit heavier than I was at IMAZ 2014, which was the last time I wore my wetsuit. I had the bike of my life and my run was a little slow but still a respectable 3:30 which I was happy with given that I’m not in the best run shape right now.

I’m really happy with a 9:19, even though my primary IM goal now is to go sub 9 (next chance, IM Boulder 2016!). I don’t plan to do Kona in 2016, as I’m focusing on Ultraman, so above all I wanted to have a really solid training day out there and race hard with no fear of consequence.

I had some really bad cramping issues in my left glute the day before the race, so I woke up feeling like a gorilla had been punching me all night. Other muscles would also just randomly cramp for no apparent reason, which is a bit concerning when you have a big race day ahead. The good thing about knowing ahead of time that you’re going to have cramping issues, is that you can anticipate it, and I was able to manage it during the race. I cramped at the start of the swim, bike and run, but I just relaxed and focused on maintaining a steady effort for 10-15 minutes and they went away each time. So in the end, the cramping really was not much of an issue. I was very satisfied being able to get through the day in one piece, the 9:19 and 2nd place was a bonus!

Swim: 1:05 was a massive underachievement for me. To give you an idea of my current pool times, in the last 3 weeks I did a 1 mile (1650m) TT in 23 minutes and several 1km TTs in 14 minutes. My “all day pace” with no wetsuit is about 1:28/100m. So in theory going under 60 mins in an IM should feel very easy. I felt like I was in shape to swim around 56/57, which at least would have put me within closer reach of Scott Bowe who I thought would swim around 52, and ahead of Steve Johnson who’s just been sitting in the hot tub every time I go to the pool 😉

The rolling start was a mess at IMAZ. Basically you enter via a wide set of steps, perpendicular to the direction of the course. So even if you line up near the front, if you are towards the left then you are actually several rows back once you jump in. Then once you’re in, it’s chaotic until you get clear of that. Given that the goal of this rolling start idea is safety, I think they failed at IMAZ. The mass start is much safer a) because you get to warm up b) there is more than enough space for everyone.

Since my basic speed is quite good, I got clear of the mess pretty quickly, but I just felt very awkward for the whole swim, kind of the same feeling you have after not swimming at all for a few months. I also felt very constricted and out of breath. It took a huge amount of mental focus to stay calm. Maybe I’m too fat for my wetsuit who knows! Within about 15 minutes I knew I was going to have a bad swim time. When the people around you don’t look like competent swimmers, it’s a bad sign (since they are ahead of me, I probably look worse than they do!). Every pair of feet I found was either zig zagging all over the place, or swimming in the wrong direction. So I just swam alone the whole way.

Bike 4:37 – very happy with that. From what I can tell by looking at the top 10 in each AG this was the fastest amateur bike split.  Here is a link to my bike data. The plan was to bike a bit harder than usual, like I will at Ultraman. Pretty much using IMAZ as a long, intense training day. The presence of competition, plus having aid stations makes it a great opportunity to do that. My first lap started off with bad glute cramps, but they resolved after 10 mins and that lap was done at an intensity factor of .85 which is closer to what I might ride in a half ironman. Laps 2 and 3 were more crowded so I had to ease off a bit more often with an IF of .81 which felt like a steady all day pace. My VI was 1.03 which is the lowest I’ve ever had in an IM. This was a bike PR and my best executed IM bike to date. I also had a very tasty nutrition assortment. On the bike, I flavored my malto/fructose mix with 2 bottles of “hand crafted” Q ginger beer, which was awesome. Definitely keeping that. I rounded it off with 8 gummy worms and 2 bags of powerbar cola chews, averaging 430 calories per hour. The XLAB Torpedo bottle is a great addition to my setup. I started with that, plus a bottle of my mix mounted directly to the Dash TT.9 saddle. My only take from aid stations was 2 bottles of water. I feel this really helps at IMAZ because the aid stations can get a bit congested, especially on the later laps.

My bike setup is below. Zipp 808 front, Super 9 disc rear, 54/44 Rotor Q rings (which they say is equivalent to 56 at “peak” ovality, a huge asset at IMAZ, I didn’t spin out at all). Rotor 3D+ 165mm cranks, 3T Aduro bars, Dash TT.9 saddle with Pave Pria . I switched out the Conti tires for Turbo Cottons that Rappstar kindly lent me. Tririg Omega X brakes, Di2 shifting. Icefriction coated DA chain. 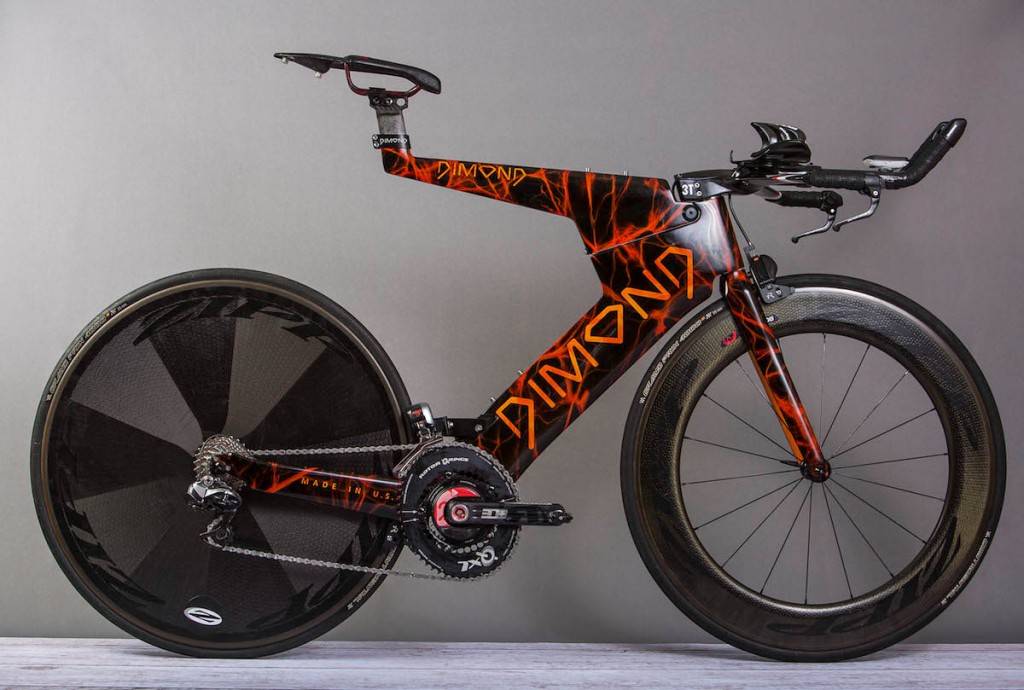 This was my IMAZ race setup 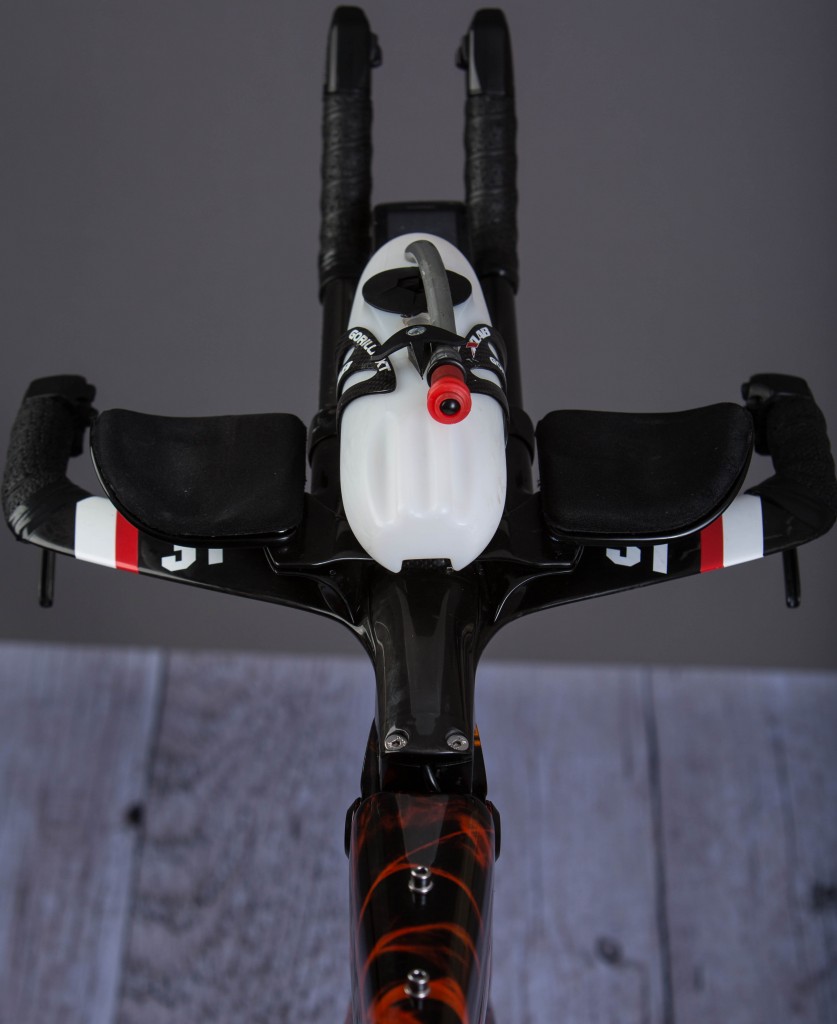 BTA bottle is an XLAB torpedo directly mounted onto the 3T bar, in an XLAB Gorilla cage

Run: 3:30 I felt great getting off the bike, made a quick porta potty stop on mile 1, and then settled into a steady pace just going by feel, around 7:10/mile. At around the 10k mark I could feel my hamstrings starting to tighten up, like a very dull cramp. I also had minor shooting cramps on the outside of my glutes, which I just ignored but my pace did slow a bit for the same perceived effort. I hadn’t seen Scott or Steve at all the entire race. I knew Scott would be way ahead out of the swim, but I thought I would have been close enough to Steve to at least see him. Later I would find out that Steve unfortunately DNS’d and that Scott would eventually beat me by 30+ minutes, which explains why I saw neither of them! Other than that I had no idea what place I was during the race. I started the run with Jack Toland who won the 18-24 AG, but he left me behind within the first mile. It started to rain pretty hard, and I knew the cold weather would demoralize some people. Since my last few training runs were in the snow, it actually felt pretty mild to me! I knew it would be a race of attrition so I just kept a steady pace, didn’t walk, and just kept going.  I saw nobody else in my AG, and nobody else that I even knew. On lap 2, the gravel path had turned into a mudbath. I tried to run on the grass but it was all mushy, so I ran on a single file line of bricks for as long as I could. I found Jack again around mile 17, and we ran together up until around mile 20. Side note: The warm chicken broth at the aid stations was just incredible! I was feeling good so pushed a little harder towards the end. My last mile was a superb 7:03 – I should get a side job as Tim Noakes’ poster child for his central governor theory!

Here is a comparison of my 2014 vs 2015 IMAZ runs. You can see a definite slow down around mile 10. A key difference is probably the mental aspect of competition – in 2014 I was chasing down Adam Zucco, in 2015 I was on a long training run with no idea of my place or who was ahead or behind me. Here is my data file. The other aspect may have been run nutrition. In 2014 I was robotic about calorie intake, in 2015 I just didn’t feel like taking much in, but I should have forced it if I wanted to maintain good pace.

For those that are interested, here is a comparison of all my IM bike splits to date

OveralI was very happy that I got through it all without much going wrong.  The awards ceremony was great – the Dimond team got 7 KQs in addition to 3rd, 5th and 6th in the pro race  (TJ, Jordan and Maik) so a great day for Dimond! It was also fun to “give away” my Kona slot to someone who really wants to go there. 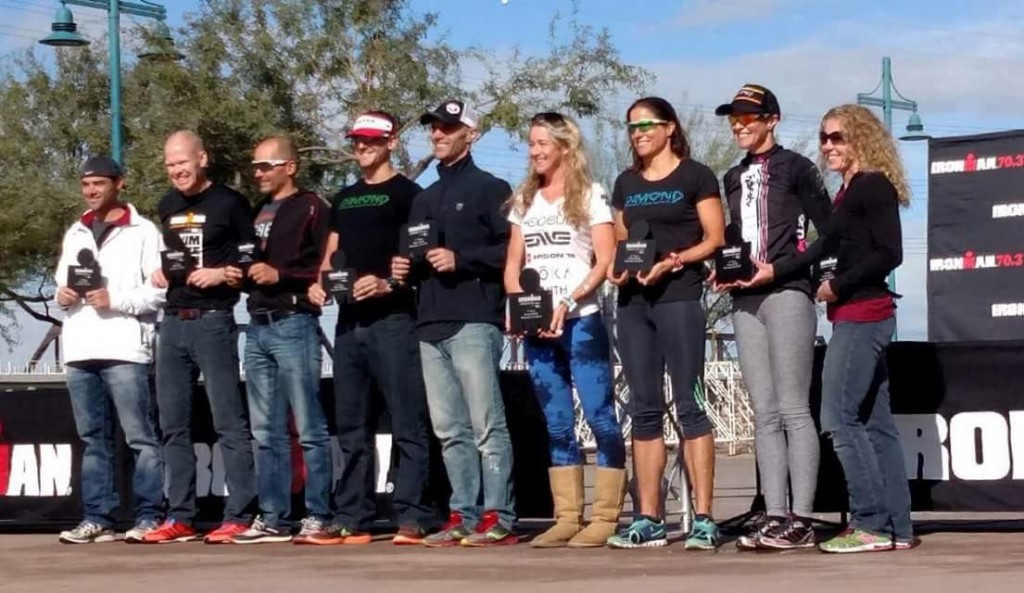 The best part of the day though, was that an athlete of mine got a kona slot rolldown in 40-44. He has put in so much work and really deserved it. He was actually in much better shape than me going in, but he didn’t have an ideal day out there. It was a bit of an emotional roller coaster going from disappointment the day before, to the high of a kona slot when it wasn’t expected. As a coach, it’s actually more exciting when one of your athletes gets a slot than when you get one yourself! 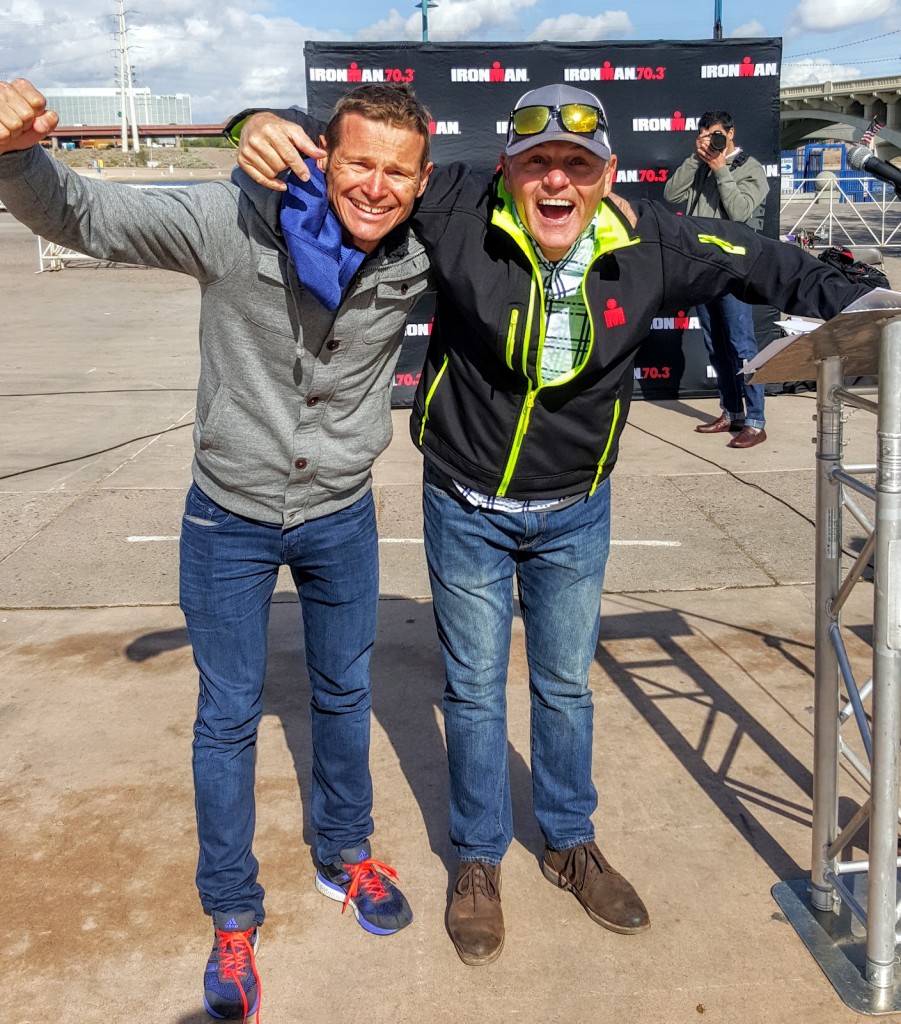 Right now I’m straight into Ultraman training. I’m back on the bike and in the pool, but will wait a few days until I’m ready to run again. Then it will be a series of 100+ mile run weeks, lots of swimming, figuring out  my wetsuit problems, and maintaining bike form until February!