Of all 3 sports in triathlon, swimming is the most technique-dependent. Real swimmers will tell you that unless you swam competitively as a child, your time is better spent working on your run and your bike. Some had the “privilege” of swimming 30+ km per week from the age of 8, and others were only introduced to the pool during adulthood. I find myself somewhere in between. 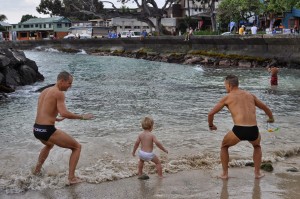 ready to hit the water!

I started swimming at the age of 2, however this was recreational (and for safety) rather than competitive. I did swim competitively at school, but all this entailed was turning up to swim meets and swimming. I never did any training.  I competed in 50m freestyle, breaststroke, and individual medley (only because I was one of the few 12 year olds that could swim butterfly). I also did a bunch of water based activities such as kayaking, canoeing, spearfishing and free diving. So I’ve always been comfortable in the water, I’ve just never trained as a swimmer. When I started in triathlon, I never really swam in training for sprint and olympic distance races. However when I signed up for my first Ironman in 2011, I started to take it more seriously. I was living in San Jose, California at the time, and was fortunate enough to be very close to the Santa Clara swim club, where I joined their masters group. Initially I had no idea what I was doing. They were talking about “leaving on the one thirty”, “doing 400 descending” and “four by fifty with twenty five drill, twenty five stroke ascending”… this was like Greek to me! After the first few sessions I got my head around the lingo, and saw some good initial progress from swimming with this group. At this stage I was swimming between 2 and 4 times a week, for weekly totals of between 8000 and 10000 yards. Most of my swim sessions were alone but I tried to swim with the group once or twice a week. My main frustration with the group swimming was that they did a lot of “non freestyle” work (hey I’m a triathlete, I just want freestyle!) and there was a lot of waiting around between sets. I’m pretty time efficient with my training so waiting around annoys me; that’s also a reason I avoid doing a lot of group rides on the bike… I did my first few Ironman races, with pretty average swim times. (1:12, 1:07, 1:06). I was getting faster by a few minutes each time but never really got faster than 1:06. My main training focus at that point was on biking and running, which was the right place to be spending time. Over the next 2 years my race times improved a lot, but my swimming times (especially at Ironman distance) were pretty static:

So I’ve improved a little with half iron distance, but my iron distance swim times have not really improved, despite being in “better swim shape” each year.

After my poor Kona swim,  coach Coady and I were talking about this, and whether it was worth even putting the consistent effort into my swim training, if my results were not going to be much different whether I trained or not. He suggested that we experiment with a big swim block over the winter. He talked about a few principles that he thought would work:

Then he made the mistake of telling me a story about Brett Sutton, saying that Macca’s only chance of being in contention for the olympics would be if he could swim 6 days a week, 30k per week. I then forgot everything else coach said, and latched onto these words as my mantra for what I wanted to achieve. This would be all or nothing. I’d swim as much as possible, aiming to build up to 30K per week for as long as it took to see results.

The good results came faster than expected! I started with around 25K, and will build up to 30K during January. But after just a few weeks of 20+k per week, my paces started improving dramatically. The key benchmarks that I use are 400m TT, 200m TT, 10×200 10×400 and 15×50 (what’s the consistent repeatable time interval). Longer benchmarks, done less frequently, would be 1000m TT and 3800m straight (ironman distance 2.4 miles).

So I’m encouraged that the big bet is paying off. It’s yet to be seen whether this translated into good open water times, but I’m optimistic. I’m going to continue ramping up until I hit 30K and see if that makes a difference.

The types of workout vary:

I seem to get faster when I include 2 x “vo2” sessions per week which is basically a set of 15x50m on one minute, coming in as fast as I can repeat without slowing more than 10%. So if I do the first interval in 36 seconds, I stop when I can’t come in faster than 40 seconds. When I’m able to repeat it 15 x, then I try to increase the speed. That seems to have improved my economy at slower speeds too.

I did one “breakthrough workout” of 10km which reset my mental perspective of what a long workout is. I’m thinking of maybe doing this once a month.

At least 2 workouts per week 6km or more

2-3 x per week do 1500-2500m on the vasa ergometer, which is basically a very swim-specific strength workout that in my opinion is much more effective than swimming with paddles.

I’m now ramping up the volume again, and will repeat some benchmarks in a few weeks time. It will be interesting to see if it was a once-off boost or if I will continue improving!

UPDATE: now at the end of 2014, I have some measurable data to feed back. I did 3 Ironman races this year, all with swim PRs. I swam 1:03 and both IMSA and at Kona (people say the Kona swim was tough this year, and I was 4 mins faster than 2013). And then I broke 1 hour to swim 59 min at IMAZ. As for the benchmarks, I haven’t really improved much in the individual TT distances, however my 10×400 repeats has improved quite a bit.  I can now pretty comfortable swim 10×400 coming in under 6 mins for each rep. On the Thursday before IMAZ I did that workout and was coming in at 5:45-5:50 for most of them. Most importantly, I figured out that I can sustain the improvements I’ve made by doing a short, big swim block before a race. So, in “maintenance mode” I just do 10K-15K per week and don’t lose a lot of speed. Then before a race, I bump it up to 25K+ for 3 weeks, and don’t taper at all (just rest 2 days out). That’s the formula that works for me, and I’ll probably stick with that for now. I could probably gain another few mins with a lot more work, but my swim is no longer a big limiter.  Over this coming winter I’ll be doing a lot of indoor swim work on the vasa erg. I think it’s a unique tool that offers some interesting possibilities that a pool cannot offer. So I’ll be experimenting with that and seeing what happens.  Time to focus on getting that run split down now! I’ve got at least 15-20 mins lying on the table waiting for me to take it…

The road to Kona starts now!

2 thoughts on “Can I turn myself into a “real swimmer”?”