It’s just 3 weeks after Ironman Switzerland, and my next one is the Vineman on Saturday 30th July. It’s not an official Ironman branded race, but it’s the same distance (2.4 mile swim, 112 mile bike, 26.2 mile run). 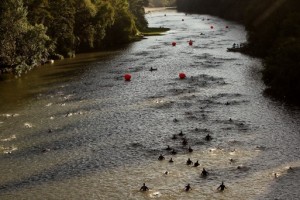 Fortunately IMCH is fresh in the mind so I can make a few tweaks and experiment with some changes. I feel pretty relaxed about it, so I’m going to go out a little harder this time and see how it goes. The general plan is as follows:

– Swim: start faster and avoid the masses. Luckily Vineman starts in waves so there are fewer people than the 2200 in Switzerland.
– Bike: aim for 215 watts average (at IMCH I aimed for 190W and averaged 204W), not sure if this will translate into a better time since Vineman is mainly rolling hills, no long flats and no long downhills, also no bad uphills.
– Run: take on more nutrition, and try to stick to 5:00/km then go faster if I feel good

I definitely want to go under 11 hours, but I think Switzerland (11:02) is a faster course so it’s difficult to tell what will happen. Basically I’m going to put in the effort that would give me a 10:30 in Switzerland, and hope that it turns out to be only 30 mins slower in the Vineman…

Looks like we will have great weather (84F, 28C). I’ve pretty much done nothing since Ironman Switzerland, except for a few open water swims in Hawaii last week, so either I’ll be well recovered or have lost some fitness… but I don’t think I’d lose much endurance in a few weeks… I’ll soon find out!