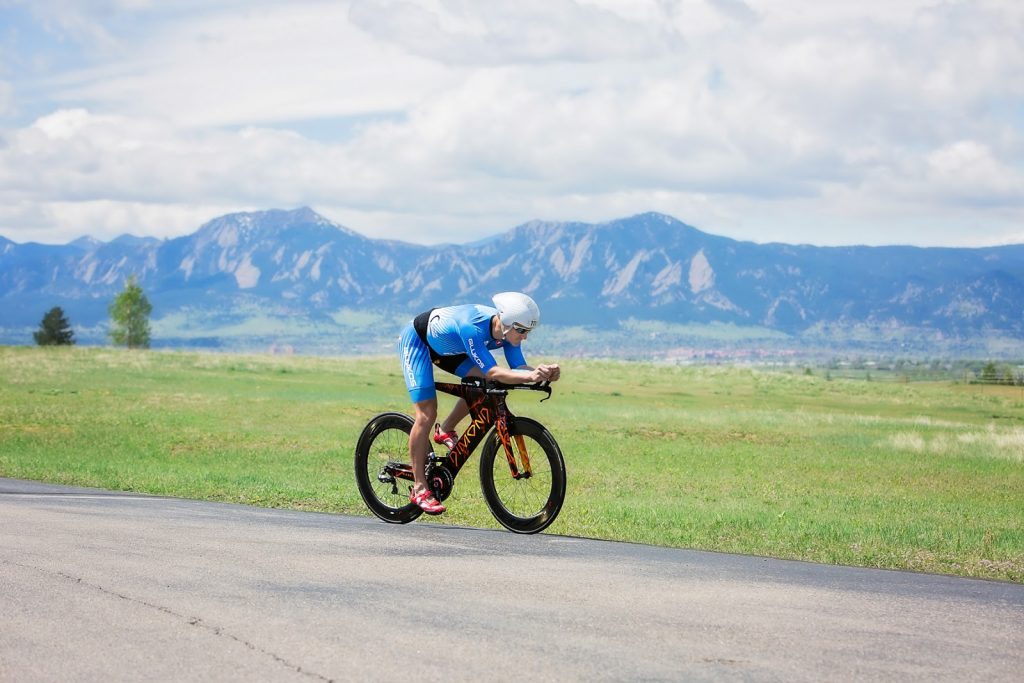 Swim: 30 min (not bad since I was still standing on the beach when the gun went off!)
Bike: 2:06 (happy with that time, although it’s only 54 miles not 56, but from what I can tell 2nd fastest age group bike split after Steve Johnson who is also on a Dimond. Fast bike!)
Run: 1:51 (one of my worst run performances in a triathlon, but it’s what I had on the day)
8th place in M40-44 (shows that you can still go top 10 with a great bike and terrible run)

So, Boulder 70.3 – my first “home town” race.  The main goal of entering this race was to have a goal to work towards after Ultraman Florida. That ultra stuff made me a bit slow, especially my run, so I entered the 70.3 as a way to force myself into getting a bit of speed back in the legs. A week before I did the Colorado Triathlon (Olympic distance) with the same goal – to get a bit of sharpness back and tune me up for the 70.3

Doing a race in your home town makes things quite a bit easier:

– no bike transport, so your bike is just ready to go without much prep
– you can sleep in your own bed
– you can eat your own food
– so there is a lot less stress around race day

On Friday night I slept very well, got up early, ready to ride the “beater” mtb to the start (15-20 min ride). Then Michelle got up and said “I’ll just wake up the kids and drive you there”. Awesome – that will make things easier! So we drove off, got about 2 miles from the rez, and traffic came to a complete stand still. Ok no problem I still have an hour before the start. The traffic was slow, but I managed to scrape through and get into transition 15 mins before it closed (but an hour later than if I’d just ridden the mtb there. I quickly filled the torpedo bottle, pumped my tires and exited transition by 7:10. My wave was starting at 7:30 so I still had enough time (so I thought)  to get the wetsuit on and relax a bit. I pulled on my wetsuit bottoms but left the top unzipped while I drank some water and sat on the grass. The pro women went off, then I heard the announcer say “last call for men 40-44 orange caps”… it was only 7:20 so I thought it was strange that they were making a last call 10 minutes before my wave. Then I looked and saw all these guys in orange caps waiting in the water already. “Orange caps 1 minute to go”… oh crap.

And here I am standing on the beach trying to zip my wetsuit up… I run down the beach to the start, while zipping my suit up. Dammit I need to switch my garmin on… it comes up and I haven’t saved yesterday’s bike workout. dammit dammit. I save/delete/whatever that ride and get it into open water mode (still running to the water’s edge). As I get it into open water swim mode, the gun goes off. I see Michelle and the kids on the side and wave hello before diving into the water, while pushing start on my garmin. I don’t want to lose any valuable data! I’m literally the very last athlete to enter the water, but oddly this doesn’t phase me at all. I settle into a strong rhythm and swim all the way through my wave, with the exception of a few guys at the front who I just couldn’t catch up to.

About half way through the swim, I started overtaking some female pros. By the end I would have overtaken 5 female pros, so I knew I was at least not swimming that badly. The odd thing about those pro women is that they seem to be severely  lacking in tactical skills. I was swimming faster than them, but not by much. I would have been an ideal drafting target for them, but none of them got on my feet. It would have been legal for them to do that, and they probably would have cut a few minutes off their time, but they pretty much just ignored me as I swam past them.

For the last few hundred meters, I couldn’t see any other swimmers close by, so I just settled in and pushed hard to the end. I had planned on taking off my wetsuit in the water (because it’s easier) but when I tried to take it off, I had a near wardrobe malfunction when my LG bike suit came off with it. Fortunately I had the presence of mind to notice  that was happening, so I quickly put the bottom half back again! It was a long run to transition, and I used the time to put my sleeves on (I swim with the sleeves of the LG bike suit rolled around my waist). I was encouraged to see transition pretty much full, so I knew I was in a good position. I jumped on the bike and settled into a steady pace for the first few miles (242w for the first 3.5 miles). I overtook another 2 female pros before the 3 mile turnaround, and then once off the pedestrian path I hit the hammer a bit since I was now warmed up. Diagonal hwy, Jay, 36 up to Neva rd was 276w. After that, I was pretty much alone until I hit another group of female pros around mile 30. Neva/63 to Nelson was just a steady cruise at 260w. I started the Nelson road climb (about 4.5 miles) expecting to hit some higher power on the climb, but for whatever reason the power didn’t increase much on the hill – I averaged 277w even though I was targeting around 315w. After that I was back on the flats and the power came back again. My power up to the end dropped down to 260w but I was now riding by feel, just going for a solid tempo effort.

Here are some bike stats:

After turning from 66 onto 75th, my brain was obviously cloudy because I was confused as to what road I was on. And this is a road I ride several times every week! I was still alone and had not seen another age grouper yet. I had no idea what place I was in, but I knew there was at least one guy in my wave ahead of me on the swim, and I had not yet seen another age grouper on the bike. I turned into T2 with my best every half iron bike split (2:06) which I was super happy with (note it was only 54 miles not 56). As I wheeled my bike around the corner I saw 2 bikes already racked – one which I recognized as Steve Johnson’s bike (who by the way biked 2:05, also on his Dimond).  I knew there was no way I’d outrun Steve, so I started off the run hoping to just protect 3rd place. I settled into a comfy pace of 6:50 per mile, which I thought would be fast enough to hold off 4th place, especially since I didn’t think anyone behind me would be that close on the bike. A big mistake I made here was not taking my bottle of nutrition on the run. In the rush at the start of the day, I’d left my run bottle in my bag which was now lying under a tree. It was pretty close to the run course, but I didn’t go and get it, since that would feel a bit like “outside assistance from myself” – plus I knew it would be pretty easy to just get some calories at the aid station. This was where my next mistake came in – I didn’t really take anything except water at the aid stations. It was so hot, that the last thing I felt like was gatorade or coke, so i just stuck to ice and water. Considering I advise many athletes on fueling strategies for racing, this was both ironic and not-very-smart. Due to the heat I was walking all the aid stations anyway, so it would have been easy to get some more calories down if I’d had the presence of mind to do so.

The run went ok for the first few miles, then the heat just beat me down. It felt like my heart was over-beating (like palpitations), and it just didn’t feel like it would be healthy to push the pace. The last time I felt like this was Kona 2015, which was about the same temperature. My extra layer of high tech “bioprene” wasn’t exactly helping either. For those interested in acquiring bioprene, the method is very simple: just consume 1000 calories more than you need every day, and you will stack it on!

The Boulder 70.3 run course is 2 laps around the reservoir. There is zero shade, and a variety of surfaces – spongy grass, undulating dirt, and a bit of pavement. To be honest, it’s not the most fun run course. On lap 1 I averaged 7:42 / mile, but as I started lap 2 I really didn’t feel great.

So on lap 2 I degraded to 8:48 / mile, which is basically my ultraman pace! It’s funny how your body just reverts to a certain pace when things get really bad. Even though my run pace was slow, it felt like I had given everything I had on the day, which is all you can ask for really. The best thing about this bad run experience is that it’s a good kick in the pants to get me back on track before Ironman Boulder. The 2 main things I need to do: a) get my weekly run miles up to 50-60 miles per week and b) go on a bioprene elimination mission. To be competitive at Boulder Ironman, I’ll need to drop to about 72kg (I’m currently 78kg). That is also what I need to weigh in order to survive the run at Ultraman Hawaii in November, so getting there by August will be a good start… I’ll aim to gain 1-2kg after Boulder, but then lose it again after I complete my final big UM training block.

So the 3 lessons!
1. Get to the race much earlier than you think you should
2. Don’t leave your run nutrition in your bag
3. Don’t be fat for a hot race!