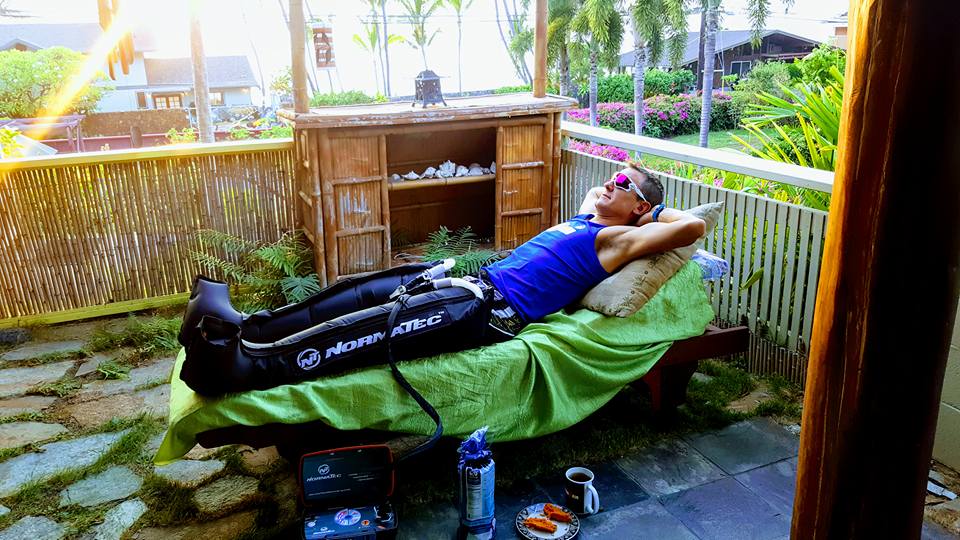 This is how I trained during race week!

I’ve had Ultraman Hawaii as my goal A race for a few years now. The reason I did Ultraman Florida was to guarantee my entry into the race. There is a wildcard/waitlist option, but with that you only find out in August if you’re racing in November. Since I knew that more prep would be required, I went down the traditional route of doing a qualifying race.

The added benefit of having done Ultraman Florida is that I had a very tangible idea of what was involved in the dynamics of such a race, the training required, and logistics of a 3 day event with a support crew.

My training for Florida and Hawaii were vastly different. For Florida, I had to train over the cold Colorado winter, so I got by on the absolute minimum, averaging just under 15 hours per week in the 3 months prior to race day. For Hawaii I could prepare during the Boulder summer, and got the double benefit of many sunlight hours, as well as pretty hot conditions throughout.

Training structure
Swim: I didn’t really do much different to regular Ironman swim training, except for a single 11k swim. Everything was 5k or less, usually about 4k. I did place a big focus on strength (lots of paddles, plus work on the vasa indoor trainer). In the final 3 weeks, many workouts were only 2-3k but high intensity and lots of paddles. In most races this year my swim has been pretty good, so I didn’t see the need to spend a lot of time on it.

Run: In the final build I had at least 6 weeks of more than 55 miles per week, and a single big 91 mile week. I trained on similar terrain to Hawaii, but based on what happened on race day, I don’t feel that I did enough long downhill running at a fast pace. Next year I will be sure to do much more of that.

Bike: I did several long rides over 140 miles, and a lot of shorter riding at higher intensities. I’m happy with my bike prep and there is not much I would change at all.

Nutrition: I have my race nutrition pretty much dialed in, so the new focus was all around daily recovery. I spent a lot of time at CU Sports Medicine, experimenting with different refueling strategies and measuring glycogen levels for each one. The LCHF people will have a heart attack reading this, but I now know that I am able to eat 1000g of carbohydrate in the 18 hour window between stages and pretty much replenish my glycogen stores!

Swim – Hawaii is wetsuit legal, and I went with a Roka Maverick Pro sleeveless suit, which is no longer in production but was kindly dug out of the warehouse by the Roka guys and given to me for this race. This was a superb choice – it was not too warm and without the sleeves I had plenty of mobility with zero shoulder fatigue.

For goggles I went with Aquasphere Kayenne which I find really comfy and have great visibility. I treated them with the new Sven Can See anti fog formula, which I chose because it’s durable and I knew would enable clear vision for the whole 10km swim.

Bike – of course I was riding the Dimond, with an identical spare bike provided by Chris (which happened to be the one I ended up riding in Florida). The main changes compared to Florida was no disc wheel (not allowed) so I used a Zipp 808 with a Zipp 303 NSW on the front. I also had a Zipp 808 NSW front wheel but I never ended up using it due to the insanely crazy winds we had. I also used Enve extensions instead of the original 3T extensions that I previously used. That allowed a slightly more controlled, albeit less aggressive position on the bike. Having now completed Hawaii, I’d say that stability and handling should always be the primary consideration. The conditions you experience are significantly worse that what you would have experienced in the Kona Ironman if you’ve done that. Bottle choice was an XLAB Torpedo for hydration and an aero bottle on the downtube for calories.

Run – I wore an Under Armour heatgear compression top (which was great), north face better than naked shorts, and 3 pairs of Hoka One One running shoes – Valor, Clifton and Clayton (not at the same time of course, that would be ridiculous). Oakley Jawbreaker PRIZM provided the eye protection (wow, amazing eyewear!) and socks were courtesy of Feetures.