We left Hilo at 5am, all the way up to Volcano for the 6:30 start. After a bit of circling around we found the start line. Basically, the whole downhill section is a no-feed zone, so crews just drop off their athletes and then drive back down the mountain. It was pretty cold, and fortunately for me, my crew member Ian Hersey had come prepared with a rain jacket and gloves for me. Given that all my previous trips to Hawaii were for the Ironman, the thought of cold weather never even entered my mind. Anyway, that’s what a good crew does!

Being the first finisher on day 1 meant I got to start right at the front. My race plan for the day was to start at a moderately hard pace, mainly to prevent anyone making a kamikaze break off the front and forcing me to chase on a wet & sketchy downhill. That tactic worked, with only Tony O’ Keefe making a pass in the first few minutes. This was really good for me, since he has ridden these roads many times before, and it was my first time ever seeing them. So I just followed Tony all the way to the bottom of the hill. It started raining pretty hard on the way down, so once again I thanked Ian (in my head) for bringing the rain jacket and gloves. As we neared the bottom of the hill, Tony and I were approaching a green light. I put in a surge to draw up alongside him in case it turned on us. My prediction came true, and we just scraped through as it was turning orange. Next we made a right turn at the Ace Hardware, and were met with a red light where I stopped to remove my camelbak and rain gear. Chris was standing at the light, so I just dropped my camelbak with him. Next thing Inaki came through and didn’t see the red light. He was almost taken out by a large pickup truck, but fortunately it saw him and stopped before squashing him. I was so amazed by what had just happened that I forgot to remove my rain jacket and gloves, then the light went green so I just rode on. I’d just have to try and undress on the fly over the next few miles! They say never try anything new on race day, and I realized now that I had not practiced undressing while riding my tri bike. I can easily ride my road bike with no hands, but the tri bike is a different story completely. I resorted to riding one handed, and pulling the clothes off with a combination of contortionism and using my teeth as a temporary hand. I managed to get one sleeve off the rain jacket, and then Ian ran next to me performing an excellent “sleeve yank” to get the other one off. Success! Next was my tight long sleeve Fusion aero top, which I had underneath the rain jacket. That was a bit more difficult but we managed to use the same technique to remove it a few miles later. Lastly, the gloves came off (literally and figuratively) pretty easily and then I was fully undressed for the day.

Tony, Inaki and I were all riding together at the front for most of the next section.  My plan was to just stay with those guys all the way into Hilo, where there is a series of traffic lights. My only goal was to not get left behind at a red light while someone else got through in front of me. As it turned out, I unintentionally made a break and created a small lead of around 2 minutes.

Just before the red road section there is a long descent; I rode it in an aero tuck without using the brakes at all, and by the time I got to the bottom Tony and Inaki were nowhere in sight behind me. So I entered the red road section (which is also a no feed / no crew zone) completely alone, with a gap ahead of the other guys that I had not intended to create.

The red road is just gorgeous. It’s a rollercoaster road under a canopy of tropical foliage, running right next to the ocean with virtually no traffic. 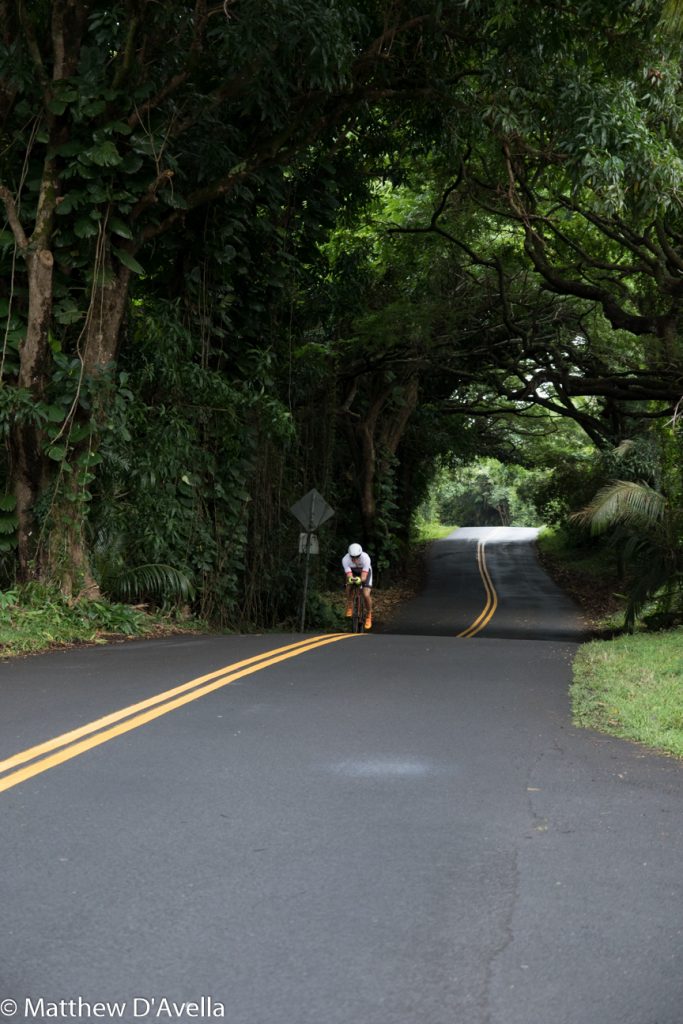 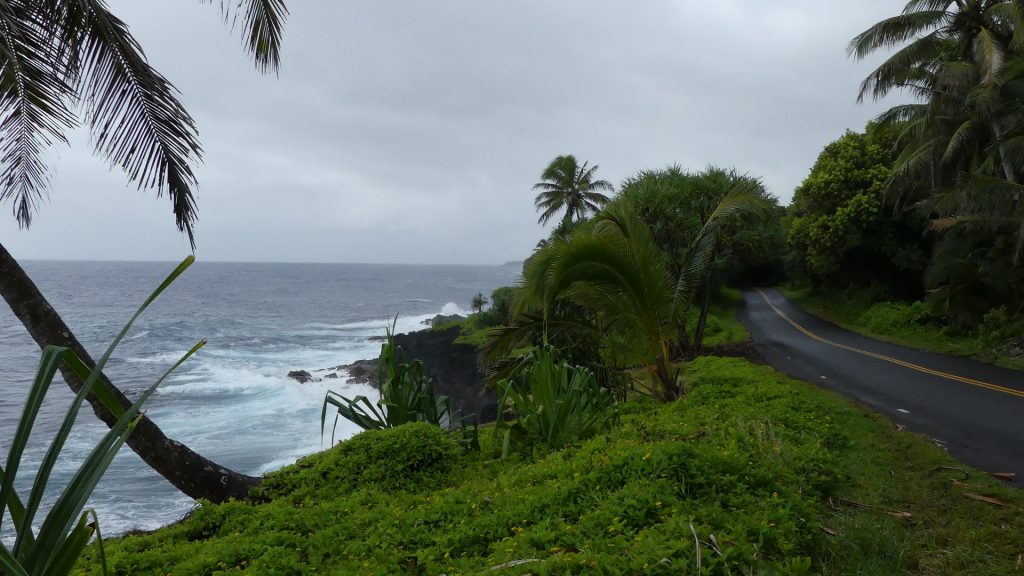 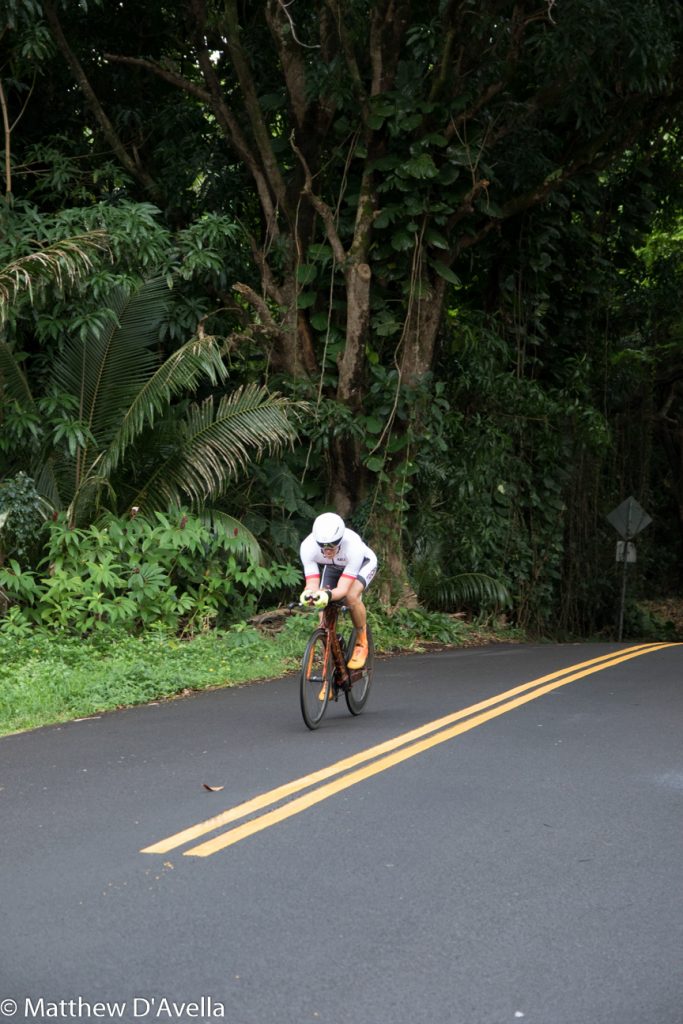 I just rode steady through this section, and then eased off on the way back into Hilo, seeing if the guys would catch up and ride with me for a bit. I made it through most of the Hilo lights, and got caught at 3 reds, which I thought was a good result. I steadily made my way out of Hilo and started the rolling section towards the Hakalau bridge, where there is a one-way closure for bridge repairs. I was still 1.5-2 minutes ahead of Inaki at this stage, but then got stuck at the red light. I was at the light for a few minutes, and Inaki drew up alongside me just before it turned green. After that we rode together for a bit, at a pretty decent effort. I could tell he was trying to drop me since he was riding harder than we had ridden up the Volcano yesterday (when I’d put 7 minutes into him). I just kept it steady and let him stay in front of me. I knew I could ride a long way at that power, and I thought he would struggle to sustain it (based on the previous day). We rode together for over 40 minutes, and then he put in some big surges. I was riding over 300 watts to stay with him (350+ on the surges), which I knew for me would be too much to sustain, so eventually I just let him go, thinking that he would blow up further down the line. I clearly underestimated him, but I have no regrets about my decision; I had to ride within my own capability, stick to my own race, and chasing him would have been a mistake for me.

That next section, from the 3 gulches (wow, much beauty!) all the way up to Waimea, was a tough section for me. It took 1:41 and I only averaged 211 watts (about 25 watts lower than my typical Ironman power). I knew I needed to save something for the tough Kohala mountain climb, so it felt like I was riding at the limit of what was sensible for me at that point. During that section Inaki put 17 minutes into me. I thought it was suicidal, but it turns out that it was a great move on his part. He obviously was very familiar with that section and knew exactly what his limits were. 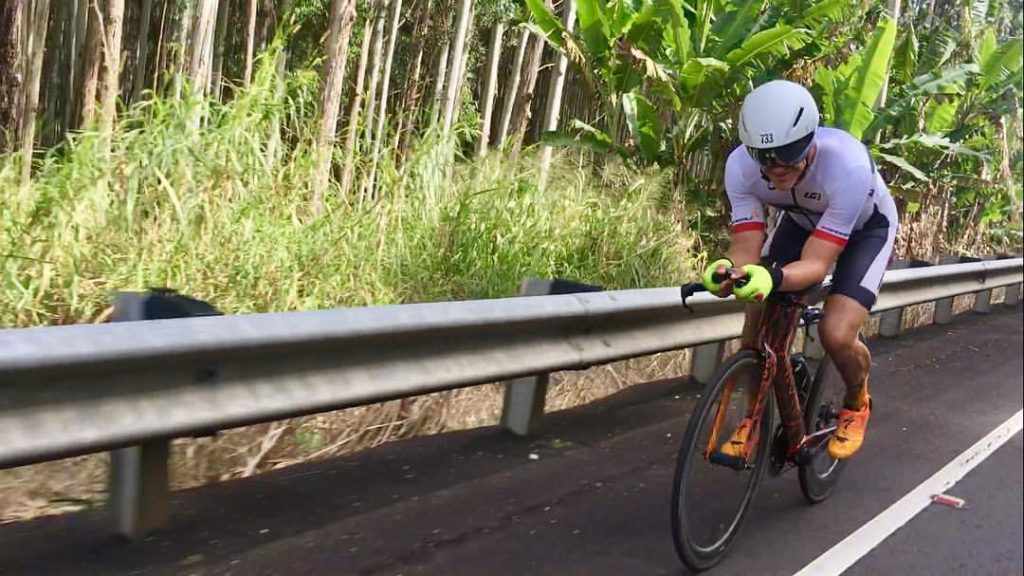 As I passed through Waimea, I readied myself for the big climb. I felt good, my nutrition was on track and I was ready to put in a final big effort. I had trained to hit this hill close to 300 watts, but the most I could muster was around 240 watts for the 30 minute effort. Although this was below target, I managed to claw back about a minute from Inaki on the climb. 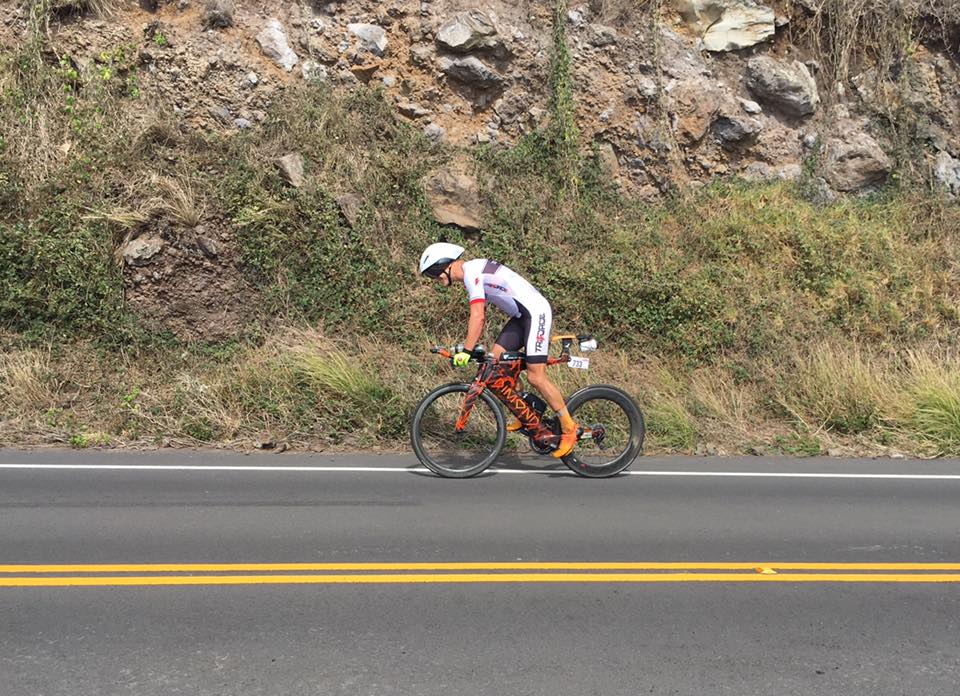 Then came the most exhilarating section of the entire course – a 13.5 mile descent down into Hawi – it’s a super fast descent with some gusty winds in some parts. I hit 50 mph down there, once again very thankful that I was riding a 303 up front. I managed to make up another 60 seconds on this section, but still ended 15 minutes behind Inaki, making his overall lead around 5 minutes. 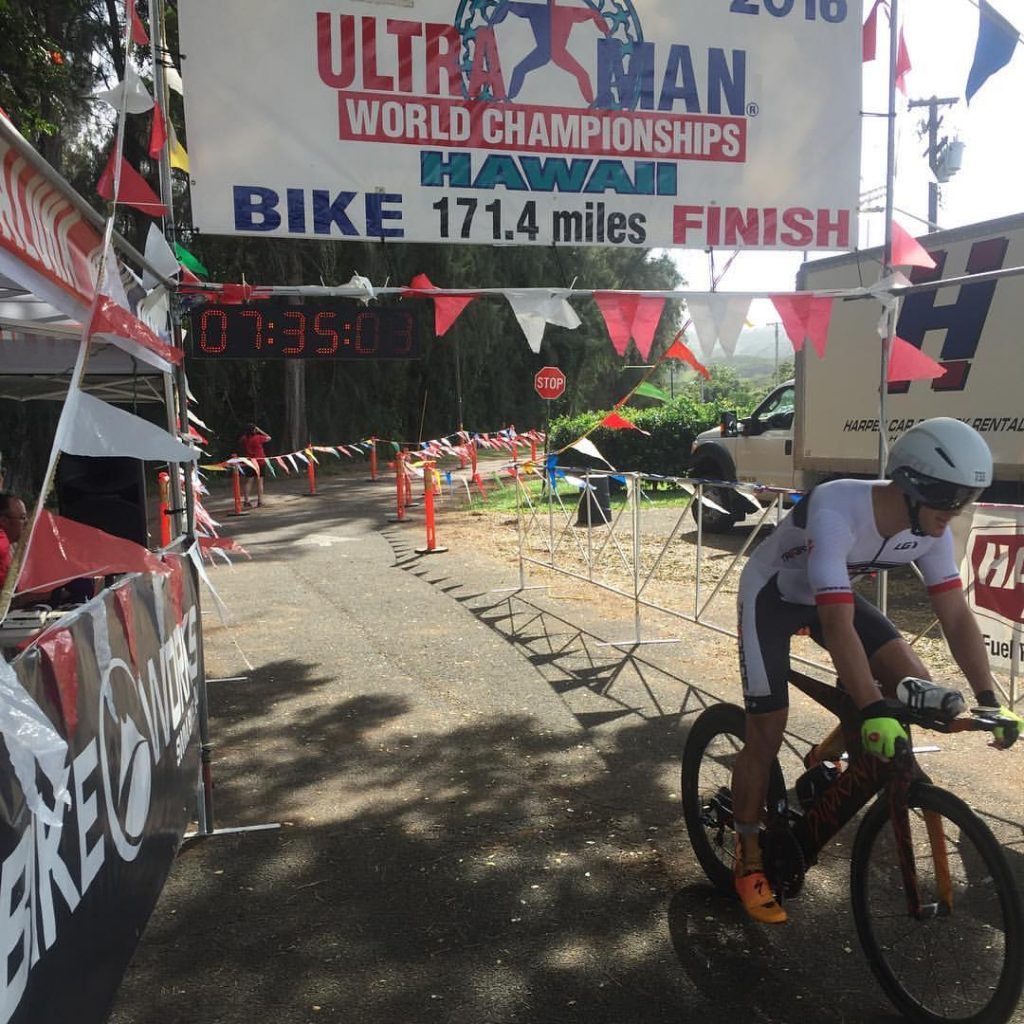 Chris washed the bike while I showered and refueled. I ate a whole tub of rice pudding, a snickers, 2 marmite sandwiches, a bottle of pomegranate juice and I was still famished! We drove down the mountain and ate some lunch at Cafe Pesto in Kawaihae, before checking into the Mauna Lani for the night. I had a good recovery session in the hot tub overlooking the beach, before heading up to the room for a good night’s sleep.