In my previous post, I talked about how I prepared for this race. Now, race day was upon us!

I was happy to wake up feeling good. I had felt nauseous and bloated since my flight on Monday, but I felt ok now and could stomach a bowl of oatmeal and some toast. We drove the 10 minutes to Kona pier and I got out to get ready. Then I realized that I’d already made my first mistake and left all my swim nutrition at the house. No problem, Chris “The Transporter” Blick spun the tires, did a few handbrake turns, and was back with my bottles in a flash. I talked to John my swim escort for a bit and then put on my wetsuit, had a drink of water and headed down the steps and into the water. I made my way to the front and then did some deep breathing to fully relax and get totally calm before the start. I don’t warm up at all for a 10k swim, since you can just do that during the first km! Steve King counted us down and then we were off! 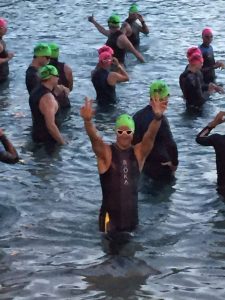 Ready to roll in my Roka sleeveless suit

You basically swim the first 6 miles of the Ironman run course; from the pier down to the Kona Surf Hotel at Keauhou. My plan was to swim nice and easy, and keep the leaders somewhere within sight. There can be some fast swimmers at this race, and I didn’t want to let them get too much of a lead. However, with 5 minutes I noticed that it was in fact ME that was in the lead. I double checked my effort to make sure I was going easy enough, but I still continued to build a lead. 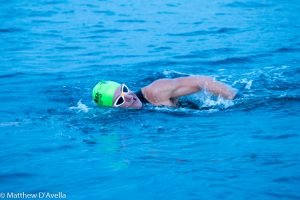 I went through the Kona Ironman turnaround in about 27 minutes, which is about the same I do there (for some reason I’m always a bit slower on the return leg), so I knew I was going at a decent pace, even though the effort was moderate. I went through the first Ironman distance (3.8km) in 54:49 which was faster than I expected. This is about the same pace I swim “moderately easy” in a pool with a wetsuit or sim shorts, so I knew that we at least had neutral current, or perhaps even a slightly favorable current.  I took a feed at that point (Glukos Energy Drink) and noticed that there were about 3 or 4 swimmers about 50-100m behind me. At the same time, I got stung in the face by some jellyfish, which gave me a bit of extra energy! The jellyfish sting also resulted in a more tucked chin i.e. I was looking directly down with my chin tucked into my neck, to shield my face from direct contact. That also most likely resulted in a good body position. Ok, so fueled by venom, I upped the tempo a bit, and by the 6km mark the chasers had dropped off quite a bit further. I went through the second Ironman mark in 54:54, so pace was still very consistent. For the final 2.5km I really gave it all I had left in the tank. We must have had a slight head current since the pace slowed a bit, even though I was swimming as hard as possible.

I was super happy to be first out the water in 2:29, and also to have dipped under the 2:30 mark, which is a big milestone for me in 10km race time. 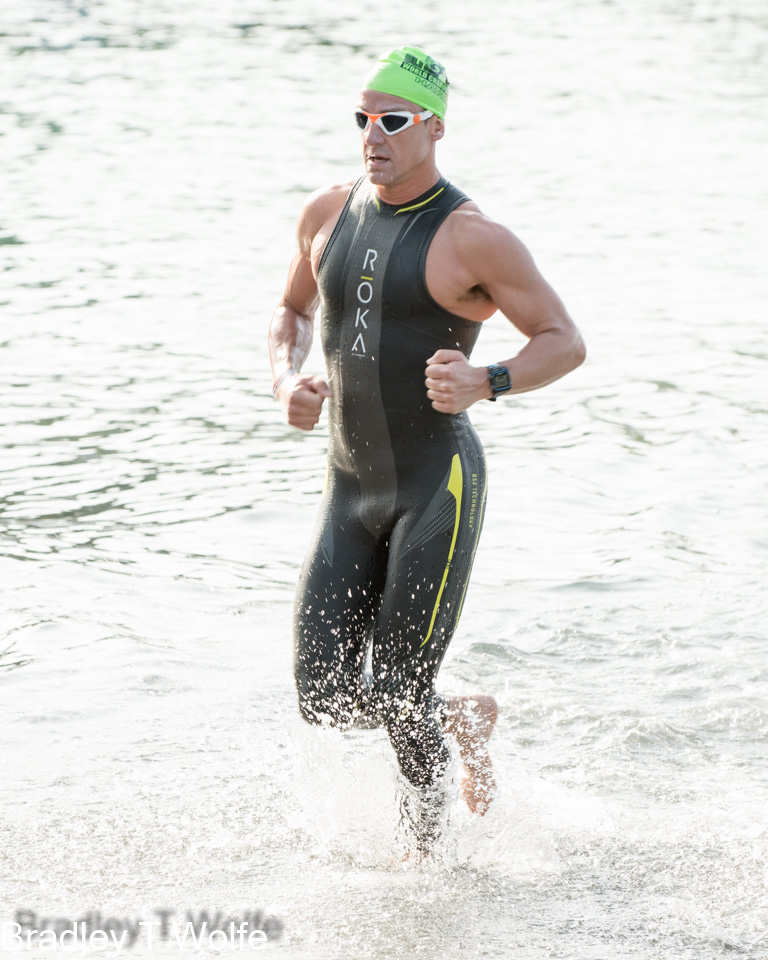 Kate was not far behind, I could see her getting out of the water as I was getting on my bike. I opted to swim in bike shorts under the wetsuit, and put on a Castelli T1 aero top in T1, with one of the main reasons being that I could tape my number on prior to the race and not get it wet during the swim. I also chose to wear socks and my regular bike shoes, mainly for comfort, plus I had done most of my long rides with those.  I did take a bit too long to get the top on, but I guess that happens if you’re my size and trying to get into a size “S”!!! One thing I would do differently next time, is spend some time putting some more chamois cream on. The water there is super salty, and it got pretty abrasive later on in the ride. 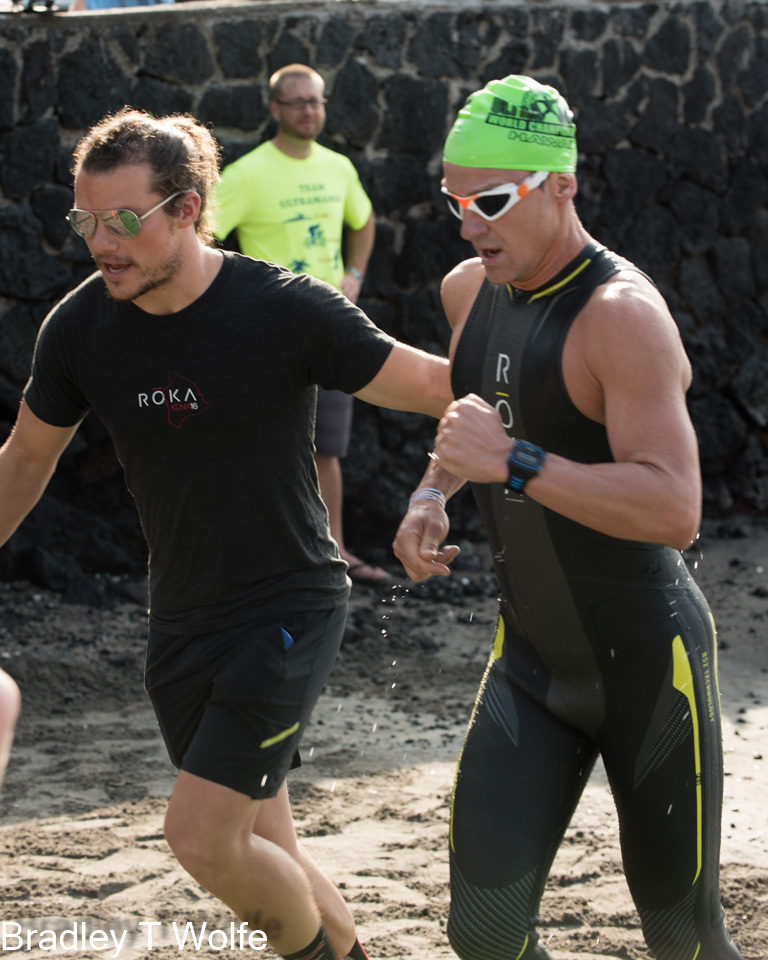 Since I’ve had previous issues with a cramping glute when getting out of the water, I had a vial of HotShots waiting with my crew. Chris asked if I wanted it, and I said no because I felt ok. Boy, did things change fast about 200m into the bike! BOTH glutes just seized up completely, and I was hardly able to pedal at all. To give you an idea, in training I was comfortably hitting about 280 watts up the first hill, and now I could only manage 188 watts (whilst screaming out in pain!). Fortunately, I’ve experienced this several times in other races, so I knew that it would eventually come right.

I still don’t know what causes these cramps. The only thing I can think of is that during the swim my core is very engaged, and since all my swimming is in a pool, my muscles are used to getting short rests when I flip turn. I’m thinking I should figure out some yoga poses that can strengthen these muscles in the right way (cobra, upward plank etc.) 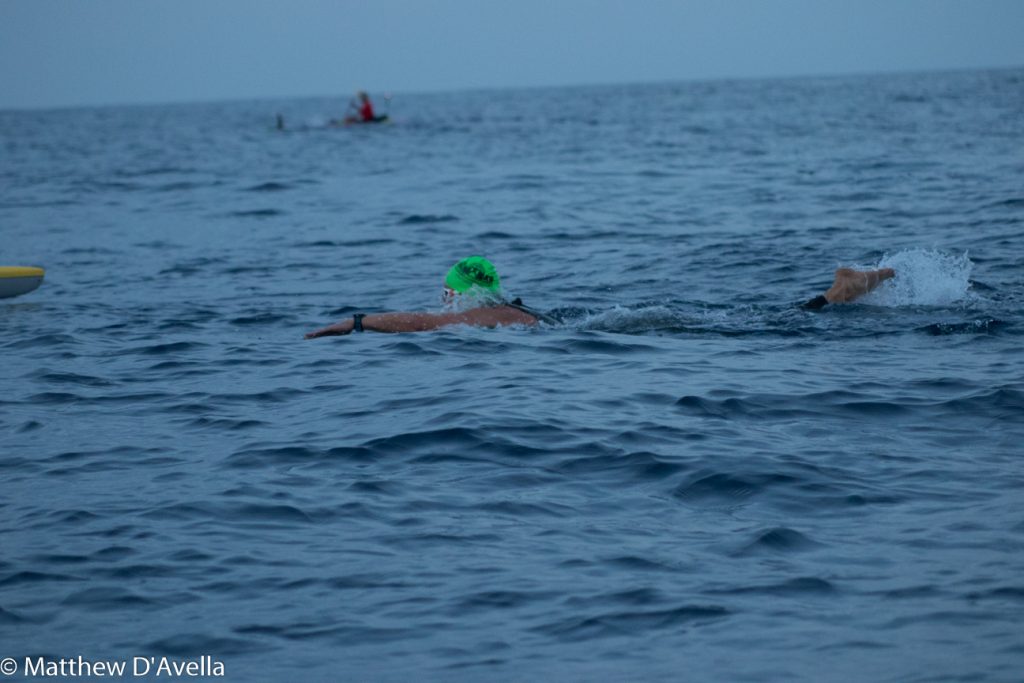 As you can see, this swim position engages a fair amount of “core”

So, I’m weaving up the climb at 180 watts, shouting out in pain, when fortunately my crew drove past and I waved them down. Chris gave me the HotShots (a freebie with most Ironman swag bags these days) and within about 10 minutes the severe pain had subsided. At least I could pedal now, but still not able to get into the aero position. Near the crest of the hill, Kate caught up to me and passed me. She’s a pretty strong rider and took the lead for a while. As she rode past, I noticed that she was riding a deep wheel on the front. I’m not sure if she checked the forecast, but we were due to be hit by SUPER WINDS later in the day. Personally I had opted for a Zipp 303 NSW, which I’m confident in riding in any conditions. Right now, conditions felt perfect for an 808, so I hoped that I had been accurate in my weather assessment.

After about 30 minutes I could finally get my glutes stretched out and was able to get into aero. As soon as we hit the first series of downhills, I dropped Kate pretty quickly. I’m probably 20kg heavier than her, plus I was a lot more aero, so it did not require a ton of effort to make up time on the descents. I was mostly at around 35 mph which is not that fast, but the conditions of the roads didn’t really allow much faster on that. Day 2 would be a different story, with many occasions for 50mph+ on the descents.

I didn’t see anyone else for the rest of day 1 (besides  my crew, and my Mom and Dad who had come over all the way from SA). As we turned west along the southern end of the island, we were hit with brutal headwinds. I say headwinds, but any slight turn in the road meant an effective change of wind direction. So it was actually difficult to predict where the wind was going to hit you, making handling very tough on the descents. I would be weighting my body in one direction and suddenly the wind would hit from the other direction. 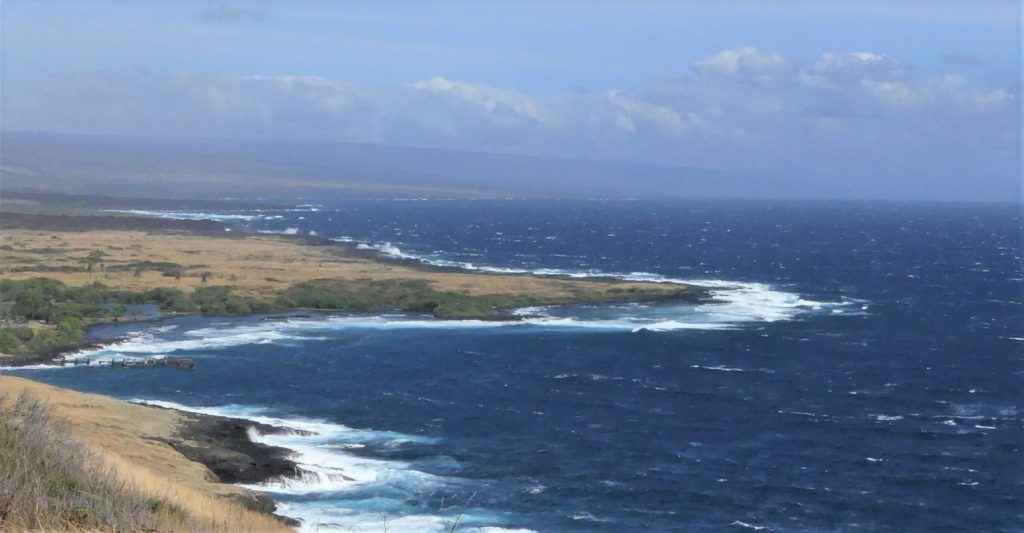 A little bit of wind!

Here is a video of Bob Babbitt trying to say something without much success!

The wind was so strong that I got hit by a tree branch that was being blown across the road like tumbleweed. It was unlike any conditions I’ve ridden in before! 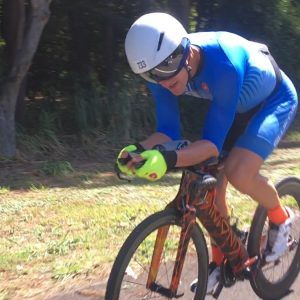 Once the climb to Volcano started, I suddenly saw Inaki’s crew pull up alongside me. I knew then he must be close. A bit later I saw my crew and they told me he was 3 minutes back. It was time to dig a bit deeper! I went out of cruise mode and into “Ironman race pace mode”. I could only sustain that for about 30 minutes, before I eased off a bit, back to “long ride moderate pace” for the remainder of the day. I was opening up the gap every time I got a new split, so I just continued the same effort up to the end. By the time I crossed the line, I’d rebuilt a bit of a lead, back to 10 minutes. I was very happy with my effort, as well as the fact that I now had a sense for my opponent’s efforts and what they could sustain for long periods (or so I thought!).

Upon crossing the line, I did a short interview with slowtwitch and a short video interview with Bob Babbitt (unfortunately poncho man was left behind in Kona, presumably having more pressing ukelele-playing commitments).

I spent a few minutes getting is some recovery fuel (half a bottle of tart cherry juice, 2 marmite sandwiches that my Mum had made, and a rice pudding),  then had a quick shower and jumped into the car for the trip down to Hilo where we were staying. In retrospect, I should have stopped at McDonalds for a few burgers on the way. If I analyze my post-race fueling, I did just fine on calories and carbs, but I could probably have upped the protein a bit, since when I got to day 3 my legs were sore; something that is not very common during training. Also, if you’re eating a high % of carbohydrate it’s actually pretty difficult to get in enough calories, so you need to get in some fat and protein once that initial 2 hour fueling window is done. A good refueling plan would be high carb for about 2 hours, then add in some more normal foods including a decent amount of fat and protein, then a dinner with a good amount of fat and protein, with a high carb meal just before bed. 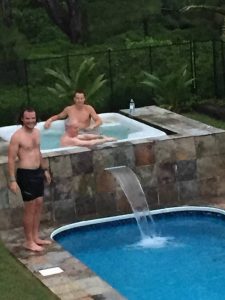 We had a crew recovery session in the hot tub and then got an early night, ready for day 2.